Breitbart News appears to be angling to overtake The Onion as the funniest Internet site. Unfortunately for them, they aren’t doing it on purpose.

The geniuses at Breitbart News blasted out a shocking expose today that threatens to blow the lid off of Obama’s Justice Department. After an investigation that included the filing of numerous Freedom of Information Act requests concerning “questionable behavior by agency personnel” and their relationship with the Southern Poverty Law Center (SPLC), Breitbart’s crack team of reporters (or is that team of reporters on crack?) published the shocking results of their investigation. 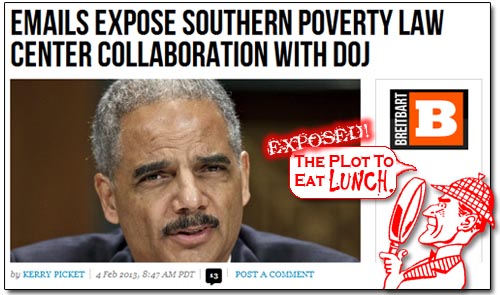 The DOJ had invited Morris Dees, founder of the SPLC, to speak at a Diversity Training Event. Dees was a particularly appropriate choice to address the group because of the SPLC’s long record of fighting bigots and hate groups and advocating for, and teaching, racial tolerance. The SPLC has also worked with both federal and local police agencies to identify racist individuals and groups who engage in criminal activities.

What Breitbart found, via their pals at the right-wing legal group, Judicial Watch, was a batch of emails that revealed … well, see for yourself (cut and paste from Breitbart News):

That’s it. Really! The DOJ communicated with a guest speaker to arrange airport transportation and meals. And for this Breitbart seems to think that prison, or perhaps waterboarding, would be warranted.

This article, written by former “Moonie” Washington Times reporter Kerry Picket, castigated the SPLC as an “attack group” and complained about them allegedly “labeling organizations with conservative views on social issues as ‘hate groups.’” However, it is hardly the SPLC’s fault that many so conservative groups are so often found to be bleating overt hate-speech. The SPLC carefully documents every allegation they make and they are respected by the nation’s foremost experts on organized bigotry.

This is another example of the BreitBrats simply targeting an ideological opponent and, lacking any evidence of actual wrongdoing, manufactures an imaginary outrage with which to regale their easily misled audience. But when the pickings are so slim that they are reduced to fanning a scandal comprised of dining reservations, you just have to laugh. It doesn’t get much more pathetic than this.