This morning on Fox & Friends, the kindergarten crew welcomed Rupert Murdoch’s personal attorney, Peter Johnson, Jr. (the man with three euphemisms for penis in his name), to engage in yet another round of bashing Al Gore for selling his Current TV network to Al Jazeera. 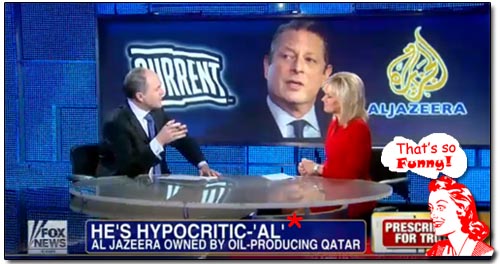 In this episode, Johnson demonstrated an embarrassingly poor ability to make a cogent argument, which should worry his client Rupert who is engaged in numerous legal entanglements related to the News Corp hacking scandal in the UK.

Fox’s Gretchen Carlson introduced the segment with a video clip of Gore commenting on Fox News and right-wing talk radio, saying “The fact that we have 24/7 propaganda masquerading as news, it does have an impact.” It was that swipe at Fox that prompted this rehashing of old news. And rather than try to dispute the obvious truth of Gore’s comment, Johnson launched into his harangue about Gore permitting a news enterprise based in the oil-producing nation of Qatar to buy his network, thus affirming Fox’s status as The Whiniest ‘News’ Network Ever:

Setting aside the fact that Johnson thinks Gore, who just made $100,000,000, has lost his mind, the case he is making defies logic. If it is, as Johnson says, like selling to the NRA who cannot report objectively on guns because they are proponents of guns, then Johnson is asserting that Current cannot sell to Al Jazeera and expect objective reporting on climate change because Al Jazeera is a proponent of climate reform measures. Except that Johnson just got finished criticizing the sale because Al Jazeera’s oil-rich Qatari base would oppose such measures.

So which is it? Is Gore a hypocrite for selling an environmentally conscious network to a bunch of fossil fuel fanatics? Or is he handing off his company to a news outlet that is going to advocate for alternative energy rather than cover the issue objectively? Johnson wants to characterize Al Jazeera as beholden to oil interests and biased against them at the same time. And he has the nerve to say that Gore has lost his mind?

It’s bad enough that Fox News is the public relations arm of the Republican Party. And it’s all the worse that they brazenly lie to fulfill that role. But do they have to be so staggeringly stupid while they’re at it?