In a typical display of arrogant obstinance, Breitbart News is refusing to acknowledge or take responsibility for a false story that was apparently based on a joke. 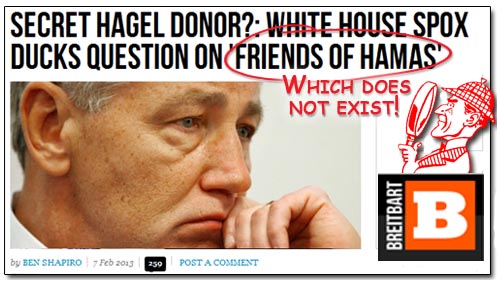 BreitBrat Ben Shapiro posted an item of February 7, asserting that the White House was “Duck[ing] Questions On Friends of Hamas” with regard to Chuck Hagel’s nomination to be Secretary of Defense. Shapiro wrote that his investigation had turned up several sources claiming that Hagel had received donations from the terrorist sympathizers with the unlikely name.

However, it turns out, as it often does with the BreitBrats, that there was no truth to the rumor. In fact, it wasn’t even a rumor, it was a joke. When investigated by real reporters it was learned that Friends of Hamas does not even exist. But upon being revealed as a hack who never bothered to look into the claims of his alleged sources, BreitBrat Ben is now stiffening his back and defending his journalistic incompetence.

Shapiro is attempting to divert attention from his bumbling reportage by attacking the reporters who actually did what reporters are supposed to do. Meanwhile, his phony story is bubbling up the conservative food chain and has even made it to Fox’s Lou Dobbs program. So far, none of these disseminators of the debunked story about the fake group have issued corrections. But that’s to be expected from “news” enterprises that have such a devoted aversion to the truth.