Please be sure you are seated before reading this. The shock that will sweep over you may rival Hurricane Sandy in its sheer, raw power. Are you ready? OK…..

Oh lawdy, where’s the smellin’ salts? I dare say I may faint. And I’m not alone. Noel Sheppard of NewsBusters was so appalled that he penned an op-ed for Fox News to unleash his umbrage at this scandalous effrontery. How dare this wanton trollop deign to insult such a virtuous citizen with so foul a curse. And because every spasm of faux outrage requires a racial reference, Sheppard managed to find something in Maddow’s comment that was analogous to the use of the “N-word.” The editorial begins innocently enough by asking us to…

“Imagine for a moment a Fox News host calling one of the liberal Supreme Court justices such as Sonia Sotomayor a ‘troll.'”

Indeed. Just imagine it. Oh wait. You don’t have to imagine it because on April 30, 2009, Erick Erickson said this about retiring Supreme Court Justice David Souter:

“The nation loses the only goat fucking child molester to ever serve on the Supreme Court in David Souter’s retirement.” 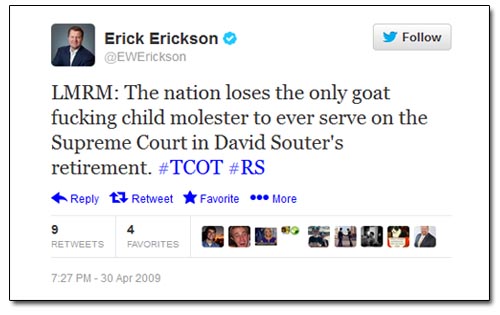 Now that’s the way to express respect for our judiciary. I hope Maddow is paying attention. Erickson was not working for Fox News when he said that, although it does sound like something that would have been posted on the fib-infested Fox Nation. However, Erickson was just hired by Fox in January, and I’m sure that having that comment on his resume helped him to land the job. 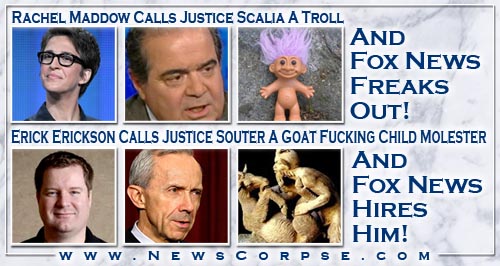 I’ll be waiting to see Sheppard’s op-ed castigating Erickson and Fox for behaving so disrespectfully to a justice of the high court. And then they can all join Megyn Kelly on her Fox program where she also took a swipe at Maddow. Perhaps they will eventually recognize that calling someone a troll is not nearly as bad as calling the landmark Voting Rights Act a “racial entitlement,” which is what Scalia said that inspired Maddow’s criticism in the first place.

8 thoughts on “NewsBusters Trolling: Imagine If A Fox News Host Had Said…”