It is long past the point when any reputable news enterprise should take seriously any story emanating from the pathological liars at The Daily Caller, or Breitbart News, or even Fox News. Particularly if the story hinges on videos of unknown origin with anonymous sources and fraudulent editing.

The latest example of the unscrupulous deceit practiced by right-wing media involves an undocumented accusation that Democratic Senator Bob Menendez of New Jersey was cavorting with prostitutes in the Dominican Republic. Menendez denied the charges from the start, but that didn’t stop the unethical reporters at The Daily Caller from disseminating the story, which eventually wormed its way up the media food chain from Breitbart to Fox to other more mainstream outlets.

The scandalous tales told by the Daily Caller peaked when they posted exclusive videos of the alleged hookers confessing to their association with Menendez. All of this just happened to go down during the final days of Menendez’s reelection campaign.

Today the Washington Post published an article that blows the whole story apart. The headline, “Escort says Menendez prostitution claims were made up,” sums up the affair and should put to rest any question about the Daily Caller’s credibility. The article begins…

“An escort who appeared on a video claiming that Sen. Robert Menendez (D-N.J.) paid her for sex has told Dominican authorities that she was instead paid to make up the claims and has never met or seen the senator, according to court documents and two people briefed on her claim.

“The woman said a local lawyer had approached her and a fellow escort and asked them to help frame Menendez and a top donor, Salomon Melgen, according to affidavits obtained by The Washington Post.”

The Washington Post sought a statement from the Daily Caller’s chief, Tucker Carlson (also a Fox News contributor), but Carlson, despite his usual enthusiasm for media attention, refused to make a comment. There have been no corrections or updates to any of the reports previously published by the Daily Caller, Breitbart, or Fox. This is consistent with their standard operating practice of hyping smears and innuendos, but neglecting to set the record straight when their lies are exposed. 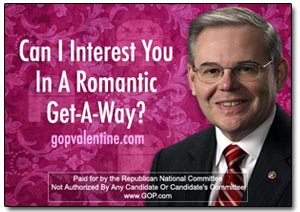 Another player to jump on the Menendez bandwagon is the Republican National Committee who put out a satirical “valentine” slamming the Senator with a snide reference to the phony sex scandal. Undoubtedly they will neglect to apologize now that they know the charges were false. What makes the GOP attack even worse is that their own senator David Vitter was caught with actual hookers in Washington, D.C. and subsequently admitted his criminal behavior. Yet he continues to represent Louisiana and, so far as we know, has not received any snarky valentines from the GOP.

The question for the media at large is, when will they finally stop paying attention to the cretinous slime merchants at the Daily Caller, Breitbart, etc.? After notorious failures like the ACORN affair, the Shirley Sherrod debacle, and just last month, Breitbart’s expose about Defense Secretary Chuck Hagel taking money from a terrorist group that, as it turns out, doesn’t exist, there should be no doubt that these pseudo-news manglers are undeserving of any respect. They should be left to peddle their tripe to the glassy-eyed blockheads who don’t know any better and the rest of the world should tune them out entirely. At this point, anyone who gives credence to these fakers is just an embarassment.