In recent days, the resounding cry from the right-wing pundits and politicians regarding sequestration has been a demonstrably false yammering that President Obama has neglected to put forth a plan to cut spending. And it’s a pretty good talking point except for the fact that there isn’t a bit of truth to it. 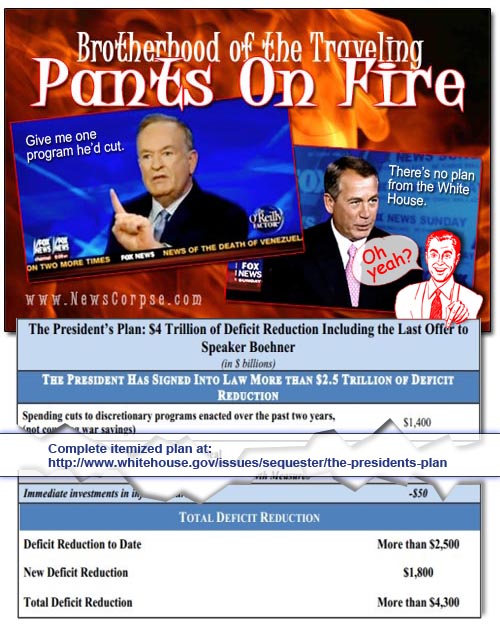 This plaintive squeal was heard last Sunday when John Boehner appeared on Meet the Press to peddle his party line fiction. He told host David Gregory that “even today, there’s no plan from Senate Democrats or the White House to replace the sequester.” For that mangling of the truth, Boehner earned a “Pants On Fire” designation from PolitiFact who posted a detailed debunking of Boehner’s…well, bunk. Boehner went on to blame senate Democrats for not passing a bill that only failed due to senate Republicans filibustering it.

The howling further escalated last night when Bill O’Reilly nearly had an aneurism while debating the same subject with Alan Colmes (video below). O’Reilly almost immediately began shouting red-faced at Colmes for his having correctly stated that the President does have a plan. O’Reilly viciously called his fellow Fox News employee a liar seven times in rapid succession as Colmes calmly objected and tried to settle him down. But O’Reilly could not be assuaged. Here is a partial transcript of the exchange:

O’Reilly: The President’s willing to have Americans suffer for the greater good of trying to have Nancy Pelosi be the new Speaker of the House. […] Give me one program he said he would cut.
Colmes: He would cut Medicare and Medicaid.
O’Reilly: That’s not a specific program.
Colmes: You asked me for a program – those are programs.
O’Reilly: You’re not telling me anything. It’s jack____ what you’re saying.
Colmes: There would be less money going to the states. There would be less money being reimbursed to doctors.
O’Reilly: You don’t know where. You don’t know how much. You don’t know to whom. And the reason you don’t know it is because the guy you revere refuses to say anything specific about anything.

O’Reilly’s high-pitched histrionics did nothing to make the substance of his ranting more truthful. Just as Boehner’s demurring failed to refute the factual evidence that the President’s plan does exist. It is available on the White House web site for anyone who is interested and honest – which obviously exempts Boehner and O’Reilly.

Watching trained circus clowns like O’Reilly and Boehner distort reality is bad enough, but what’s really troubling is the tendency of so much of the media to fail to set the record straight when there is no credible case to support the lies of these charlatans. And they will certainly not set the record straight themselves. O’Reilly in particular is notorious for digging in his heels even after he has been proven to be wrong. It’s a character trait common among egomaniacal sociopaths who regard themselves as infallible defenders of humanity’s virtue.

2 thoughts on “Bill O’Reilly And John Boehner: Brotherhood Of The Traveling Pants On Fire”