Attention all Tea Partiers. The massively humungous national boycott of the pinko liberal Fox News network is currently in progress. Join the movement that is demanding that Fox News cease to be a mouthpiece for the left. 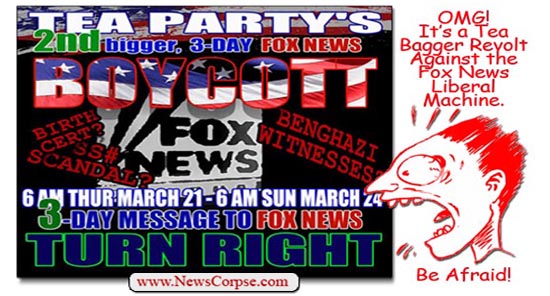 This crusade is being undertaken because Fox has betrayed the Tea Party and its far right members. They will no longer allow themselves to be taken for granted by an allegedly conservative network that is really just exploiting and deceiving them. The charade is over and these stalwart patriots are standing up to the powerful media moguls who run Fox News.

These “Tea Party Fire Ants” have a list of demands that they insist be heard and obeyed:

You got that Fox? You can no longer enjoy a free ride. The Tea Bagger Brigade is locked and loaded and ready for battle. Enough already with the leftist BS you have been shoving down their throats. They are already claiming a victory from their first boycott earlier this month which they say caused a 22% decline in Fox’s ratings (even though no such decline occurred). And they are prepared to take their wingnut business elsewhere if Fox doesn’t straighten up and fly (even farther) right. After all, they have Drudge and Breitbart (who they suspect Obama murdered) and this summer will see the launch of the One America Network from the “Moonie” Washington Times.

So if you are a Tea Bagger, be sure to shut off Fox for the remainder of this weekend. Fox needs to learn that the Tea Party will not be taken for granted. Until they commit to 24/7 programming of Benghazi-gate and a pledge to expose Obama’s Kenyan birth, Fox is no friend of the Tea Party or any other conservative.

[Editors note: These freaks are for real, but if they want to stop watching Fox for a few days it couldn’t do them any harm. It would be a brief respite from the brainwashing and lies to which they subject themselves.]

4 thoughts on “Hey Tea Baggers: Did You Know That You Are Supposed To Be Boycotting Fox News NOW?”