In a particularly repulsive display of insensitivity and brazen dishonesty, the folks at Fox Nation posted a article that falsely declared “Obama Exploits Dead Rock Star For Gun Grab.” 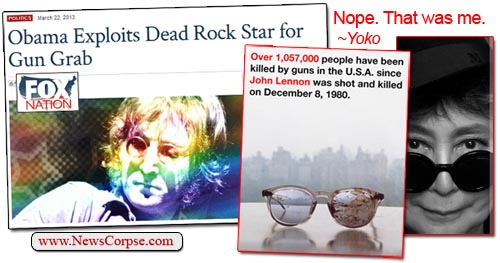 The first and most obvious problem with that article is that it is patently untrue. The allegation is that President Obama was responsible for Tweeting a photograph of John Lennon’s bloodied glasses with a message about the tragic consequences of an armed and violent society. The message in the Tweet is:

However, the President was not responsible for that Tweet. The message and the photo was Tweeted by Lennon’s widow, Yoko Ono. If anyone has a right to express outrage over the proliferation of deadly weapons, it is Yoko.

It is clear that she sent the message and the photo out with the intent that it be disseminated by her followers online. And that is precisely what someone working for the pro-Obama organization (not Obama or his White House), Organizing for America did. Re-Tweeting Yoko was not in any way exploitative. To the contrary, it was respectful because it was exactly what she wanted.

In addition, Fox misrepresented the meaning of the message by twisting it to suggest advocacy of a “gun grab.” However, it should be noted that no one – not Yoko, not Obama, not any proposal before congress – is calling for anything like the sort of confiscatory distortion advanced by Fox.

If anyone is guilty of exploiting Lennon’s murder, it is Fox. They are the ones lying about both the source of the message and the meaning of it as well. It is a disgraceful affront to Lennon’s memory (like Yoko, he was a peace activist) and to those who loved him both in his actual family and the worldwide family of his fans. So screw you, Fox. You have no standing to criticize Yoko or to speak for her late-husband.