Another month, another dismal performance by Fox News who, once again, wins the trophy for “Slowest Growing Cable News Network.” The redundancy of this news compels me to search for some other ratings story so as not to bore myself. Fortunately, I’ve found a couple. 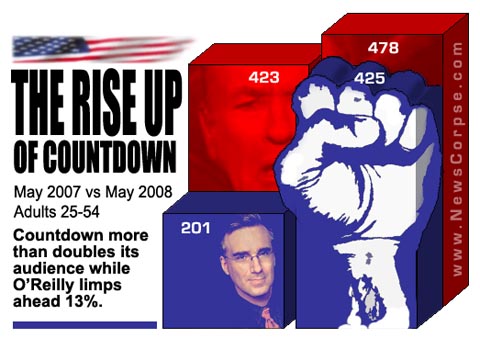 For most of the past half dozen years, Fox has enjoyed an almost uncontested dominance in the presentation of what is generously called news. Much of the credit goes to the bombastic pedagogy of Bill O’Reilly whose patented brand of obnoxiousness nevertheless found its audience. But in the past year the bloom has fallen from the amorphophallus titanum. The Factor is now showing both age and fatigue.

In the past year, Keith Olbermann’s Countdown has more than doubled its audience, growing 112%. O’Reilly eked out a pitiful 13% gain despite this being an election year that normally draws viewers in droves. Factor defenders routinely dismiss talk of growth percentages as not reflecting realities in the market. So if they want to talk about actual numbers of viewers, the past year also shows that O’Reilly, who used to beat Olbermann by a whopping 113%, is now only 13% ahead. This places Countdown squarely in contention for ratings victories that used to be considered fantasies. In fact, Countdown did beat the Factor six times in May. On several occasions it was the highest rated program on any cable news network in all of prime time.

What’s left of O’Reilly’s audience is still a sizable chunk of viewers. But if you take a closer look at the composition of the “Folks,” the myth of the Factor being some sort of TV phenomenon is indisputably busted. The portion of his audience that is in the 25-54 year old demographic preferred by advertisers is 21%. Fully four out of five of O’Reilly viewers are considered to be of little value to the advertisers that determine whether a show remains on the air. That compares to 38% for Countdown. So while Countdown still has fewer total viewers than the Factor (for now), it is a richer source for the most highly prized sector of the audience. It’s also interesting to note that O’Reilly’s demographic weakness is even worse than Fox News overall, whose total day draw of 25-54 year olds is 25% (38%, same as Countdown, for MSNBC).

By all accounts, the rise of Countdown has been extraordinary and its competitors have taken notice. The controversy that erupted last month between Fox executives and their NBC/GE counterparts is one example of how the theater of battle has expanded. Another example is the perplexing behavior of O’Reilly during his interview of former Bush press secretary, Scott McClellan. O’Reilly spent a majority of the time ignoring questions about McClellan’s controversial new bestseller, in favor of probing partisan reactions to the book in the press and McClellan’s decision to appear on other news programs before the Factor. O’Reilly battered McClellan with assertions that he was just a dupe of the left, he called McClellan “crazy,” and then put forth this inquiry:

“I watched you last week promoting the book on some of the most notorious Bush haters in the country. And you were on their programs. And I — didn’t it make your skin crawl?”

The only venue wherein that could be considered a serious question is safely huddled in the hearth of O’Reilly’s dementia. The real purpose of O’Reilly’s absurd line of questioning is to try to discredit his perceived enemies – aka, his competition. Notorious Bush haters is O’Reilly-ish for Keith Olbermann. It’s notable that whenever Olbermann casts aspersions on O’Reilly, he does it with a wink and a smile. But O’Reilly is so deadly serious about the hate America lefties that he seems to be ready to spontaneously combust. It is a classic exhibition of the symptoms of acute desperation and paranoia.

The problem for O’Reilly now is that everything he does to retard his decline just makes him look more retarded. The end is nearing, but he will never be able to admit that to himself. And when they carry him out of the studio insisting that he is still important, half the nation will be giggling, and the other half will be saying, “Bill who?”

Update 6/10/08: An MSNBC press release states that “MSNBC continued its ratings surge last week, with viewers flocking out of the “No Spin Zone” and to “The Place for Politics.” For the first time ever, MSNBC’s “Countdown with Keith Olbermann” was the #1 show at 8 p.m., out-drawing Fox News’s “O’Reilly Factor” head-to-head among Adults 25-54.” That 1st place milestone is for the whole week. Countdown has topped the Factor an several occasions this year on a nightly basis.

6 thoughts on “The Rise Up Of Countdown”