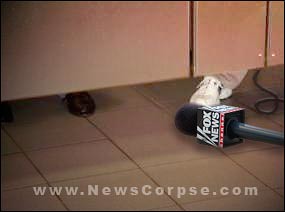 The ongoing melodrama featuring MSNBC and Fox News is heating up again and reaffirming Fox’s status as the scum suckers of news.

Two weeks ago, Howard Kurtz of the Washington Post gave readers an insiders view of the conflict that centers around the blood feud between Keith Olbermann and Bill O’Reilly. The battle lines have extended all the way up to News Corp. executive offices, including Rupert Murdoch’s. In the Kurtz column he quoted Fox chief Roger Ailes threatening his counterpart, Jeff Zucker, at NBC:

“Ailes warned that if Olbermann didn’t stop such attacks against Fox, he would unleash O’Reilly against NBC and would use the New York Post as well.”

Since then, as promised, Bill O’Reilly has devoted his Talking Points Memo to an assault on NBC/GE, calling them biased, dishonest, disgraceful, and responsible for the deaths of American soldiers in Iraq. Without a hint of irony, he said that NBC “has violated just about every journalistic standard.”

The New York Post has also been answering the call. On May 19, their Page 6 gossip monger, Richard Johnson, asked if Olbermann was “on the verge of yet another professional meltdown?” Today the same Ailes apple polisher flatly asserts that Olbermann has not paid his taxes. Johnson’s source is the utterly disreputable attack dog site, OlbermannWatch. This allegedly factual assertion is made despite the fact that it is contradicted a few lines down in the very same paragraph. But that doesn’t stop Johnson from raising additional questions about other similarly resolved tax disputes. The only purpose imaginable here is to slander with innuendo and outright falsehoods.

What’s worse is that Johnson took the opportunity to engage in an act so despicable it even reflects badly on a rag like the NYPost. Without any justification or connection to the bogus tax story, Johnson published what appears to be Olbermann’s home address. The irrelevance to the rest of the column is so stark that it jumps off the page in a fit of superfluosity. This can only be regarded as an intentional and hostile attempt to bring discomfort, and perhaps harm, to Olbermann. And coming so soon after the Ailes threat, it is difficult to arrive at any other conclusion.

Let Johnson and the Post know that this is unacceptable from both journalistic and moral perspectives: