Keith Ablow, a member of Fox’s Medical “A” Team, has a long history of deranged commentary that includes praising Newt Gingrich’s serial infidelity, condemning Chaz Bono as a bad influence on America’s children, and diagnosing President Obama as “having it in for America.”

The latest contribution to his opus of asininity is an op-ed he authored that purports to explain “How To Build A Terrorist.” It’s a surprisingly simple recipe with only two ingredients:

This set of instructions sounds awfully familiar. In fact, psychotic devotion to overvalued ideas brings to mind a recent political movement that is obsessed with things like cutting taxes, balancing the budget, promoting guns, and dismissing evolution and climate change as hoaxes.

As for being severed from empathy, that fairly describes the crowd that wants to dismantle Social Security, repeal ObamaCare, cut funding for food stamps and education, deny women reproductive health services, and pour more billions into the military/industrial complex for endless wars. 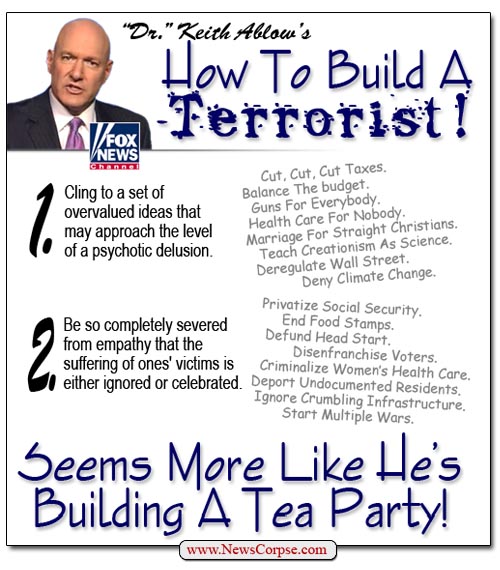 Indeed, it seems like Ablow has drafted a blueprint for the Tea Party. In his warped imagination he has inadvertently stumbled upon the formula for a divisive, self-centered, ill-informed congregation of zealots who enjoy nothing better than mucking up the wheels of progress. They literally celebrated the suffering of others several times last year during the GOP primary debates. On one occasion they cheered at the prospect of letting a man with no health insurance die. On another they applauded Texas for executing more people than any other state. And who can forget them booing a gay soldier serving in Iraq?

Ablow’s terrorist construction relies on a presumption that the subject is insane. He says specifically that…

“…when a man is deprived of his empathy by a set of beliefs that casts entire groups as inhuman and worthy of death then that man is mentally ill.”

By this measure, Ablow is absolving the Boston bombers of any responsibility for their actions. They were not, according to his diagnosis, competent to make sound decisions. Ablow even extends that absolution to historical villains like Jim Jones and Hitler. it’s not their fault, they were crazy. And they exploited the weak who would follow them unquestioningly in the same manner that…

“Cults prey on those who are psychologically unstable, offering them a fixed and false (delusional) point of view on the world around them and offering them the false freedom of projecting all their suffering on others, rather than seeking to understand it and truly overcome it in themselves.”

This could not be a more accurate portrait of the Tea Party if it were deliberate. Their delusional point of view was demonstrated in frightening detail last year when they believed everything that the Koch brothers and Fox News told them, including that Obama was going to go down in flames on election day. And although the vast majority of scientific research proves that climate change is occurring, they prefer to believe talk radio hosts over climatologists.

Perhaps the most disturbing aspect of this is the precision with which Ablow accidentally nails the Teabaggers for projecting their suffering on others. For them there is always someone else to blame, be it Muslims, Latinos, gays, etc. For them the downfall of America is easily attributable to affirmative action, terrorism, moochers, communists, atheists, labor unions, and, of course, black presidents who they fear are exerting tyrannical powers.

Check that. The most disturbing aspect of this is that Ablow has a license to practice medicine. His radically absurd ramblings would make an interesting study for a real psychiatrist. Unfortunately, Ablow would never submit to an examination. Like most paranoid schizophrenics, he would be certain that the whole thing was a plot to steal his internal organs.

28 thoughts on “Fox News ‘Psycho’ Analyst: How To Build A Terrorist/Tea Party”