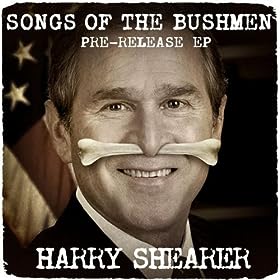 Author, satirist, and the voice of innumerable Simpsons characters, Harry Shearer, has a new CD coming out that typically skewers politics and culture. The title of the project is Songs of the Bushmen and features a debut single about the “935 Lies” told by the Bush administration in the run up to the invasion of Iraq.

Clear Channel, however, despite being an avowedly conservative media enterprise (they gave 77% of their $300K+ PAC contributions to Republicans in 2004), is demonstrating their opposition to free speech and markets by refusing to allow ads for Shearer’s work to appear on their billboards.

This is consistent with Clear Channel’s history of partisan censorship. They have previously refused ads for VoteVets and they nixed the Dixie Chicks from their radio network. And let’s not forget their ludicrous list of banned songs post-9/11.