With the right-wing media merry-go-round spinning furiously out of control over the IRS affair, it is not surprising to find Fox Nation cranking up the speed and ferocity of the misinformation. This morning’s posting of an article on lie-infested Fox Nation was adorned with this “bombshell” headline: ABC News: ‘Strong Sense’ Someone in WH Authorized IRS Targeting Conservatives.

If journalists at ABC News had actually conducted credible research (unlike their Benghazi embarrassment) and concluded that the White House had authorized the IRS to target conservative groups, that would indeed be startling and intolerable. Of course, this being Fox Nation, you might already have guessed that none of that is true.

First of all, the statement to which Fox is referring was made by Trey Hardin, a long-time Republican operative who does not work for ABC News. Secondly, Hardin made the statement on the uber-rightist radio program of Doug McIntyre, not on any broadcast affiliated with ABC’s news division. Thirdly, it was a statement that represented only Hardin’s personal opinion which he backed up with zero evidence.

Hardin: I will tell you this on the IRS front: I have worked in this town for over 20 years. I have worked in the White House; I’ve worked on Capitol Hill. I can say with a very strong sense of certainty that there are people very close to this president that not only knew what the IRS was doing, but authorized it.”

Well then, since Hardin has a “very strong sense of certainty,” that’s good enough for me. After all, who needs facts or evidence or documentation when you have senses. Perhaps he smelled the unmistakable odor of authorization.

Clearly this is an attempt by the Fox Nationalists to slap a veneer of credibility on this Tea-publican’s extremist and unsupported fantasy by dishonestly portraying it as the product of an ABC News report. And to make matters worse, Fox posted the item with a YouTube clip from McIntyre’s radio broadcast that was created by a group called “Birther Report,” whose web site is “ObamaReleaseYourRecords.com.” 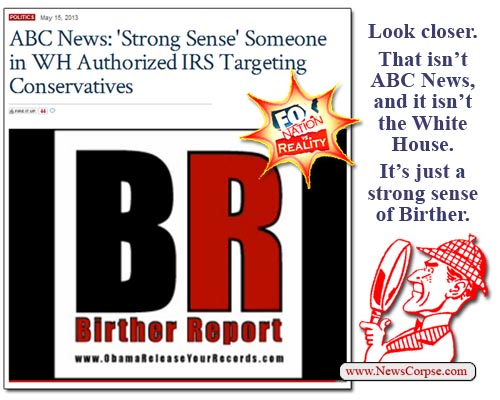 Fox is really reaching for the highest standards of credibility – at least for Fox. Their usual sources for fabricated smear campaigns are even less credible: Breitbart, Daily Caller, Washington Times, Limbaugh, etc. Apparently Fox has a very strong sense that Birthers are reliable news sources, but a very low sense of shame.