Fox News is putting all judges on notice that if they are ever criticized by Fox News, they can no longer be regarded as impartial.

This is a rather monumental upheaval for the judiciary, because Fox has criticized hundreds of judges. In fact, they have made it a cornerstone of their editorial philosophy that the judiciary (along with the media, academia, and most other social institutions) is hopelessly liberal. Fox’s Bill O’Reilly frequently sends his ambush unit (producer Jesse Watters) out to harass judges when a legal outcome does not meet with his approval, whether or not the judge had anything to do with it. And now Fox is providing cover for their own reporter by alleging some vague conspiracy between a judge and the Department of Justice. 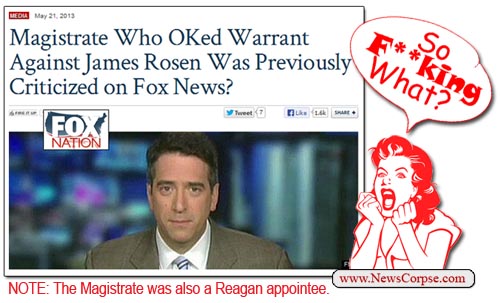 The first thing that makes this item so supremely asinine is the fact that the judge upon whom Fox is casting aspersions was appointed to the Federal District Court by Ronald Reagan and confirmed by a senate run by a Republican majority.

The source for Fox’s piece also has a less than credible reputation. The story was posted on the web site of the notorious political clown, Herman Cain. It addressed a ruling by Judge Alan Kay that permitted detainees at Guantanamo Bay to meet with their lawyers, something the Bush administration was improperly prohibiting. Author Dan Calabrese wrote that…

“Fox News quoted extensively on the air from Kay’s ruling in the case of Salim Muhood Adem v. George W. Bush. I have not seen the segment, but knowing Fox News – particularly on issues like Gitmo in the post-9/11 years – I think it’s a pretty safe guess that they weren’t quoting Kay’s ruling as a means of praising his decision.”

Seriously? Calabrese is admitting that he has no idea whether or not Fox actually criticized Kay because he hasn’t seen any criticism himself. He is simply assuming that Fox was critical because it would be consistent with their well-known political leanings. Acknowledging Fox’s biases may be the only honest part of Calabrese’s article. However, it does not satisfy any standard of proof that Fox slighted Kay, sparking a grudge that he has allegedly held for seven years so far.

To suggest that an independent jurist who was put on the bench by Reagan has joined a conspiracy with President Obama and Attorney General Eric Holder to criminally prosecute a Fox News hack is further evidence that Fox’s paranoia gauge has flipped completely off the scale. Their best efforts to topple Obama have collapsed into a pile of rotting rubble, while Obama’s approval ratings have risen in the midst of supposed scandals. That paradox is driving the right wild and causing them to concoct ever more fantastical fables.

So soon after an election that was an epic embarrassment to Republicans, they seem to have learned nothing and are continuing to live in a world of rightist delusion. No one but reality-challenged disciples of Glenn Beck and Alex Jones will believe the outrageously nonsensical tripe that Fox is spewing. And even while some of the more moderate wingers are cautioning their comrades to lay off the crazy juice, Fox continues to pour it on by the gallon. If this is their strategy for political success in 2014 or 2016, all I can say is “Bring it on.”

12 thoughts on “So F**king What? Fox News Suffering From Judge Dread”