The hyper-partisan political landscape in America has been heating up in the past week or so. Despite the numerous issues that Americans are anxious for their representatives to address (jobs, economy, guns, healthcare, immigration, defense, etc.), Republicans in congress have signaled that they have no intention of moving a legislative agenda that could benefit the nation – otherwise known as doing their job.

Instead Republicans appear hell-bent on throwing fuel on a variety of incendiary claims of scandal that are being peddled by the GOP, but with time and honest research have proven to be insubstantial at best, and dishonest at worst. For example…

Republicans Succeed In Turning Americans Against The IRS

This week the Republican Party, and their PR division Fox News, pulled off a political miracle that no one could have predicted a week or two ago. By the sheer determination of their will and endless repetition, The GOP has managed to transform the legendary public affection for the Internal Revenue Service into deep animosity and distrust. Prior to these late-breaking events the IRS had a 40% approval rating (note: that was still better than congress at 9%)

How could this have happened? The foundation of good will that has long been the envy of every other government agency has cracked and now Americans are, for the first time, eying the IRS suspiciously and recoiling in disgust. From a political standpoint, all the effort that Republicans have been pouring into this affair has yielded them an unexpected victory. They must be so proud now that they have masterfully maneuvered public opinion away from the big government bureaucracy that was once such an object of adoration.

This remarkable achievement was engineered by relentless condemnation of a branch of the IRS whose purpose is to affirm that organizations seeking tax-exempt status are complying with the legal requirement to be doing social welfare work and not politics. That seems like an important function that protects taxpayers from having to pick up the tab for political operatives who try to evade their fiscal responsibilities. The problem occurred when some low-level employees sought to identify potential evaders by imposing stricter standards of scrutiny on presumably conservative groups associated with the Tea Party. What on earth might have caused anyone at the IRS to think the Tea Party could be conducting political activities? 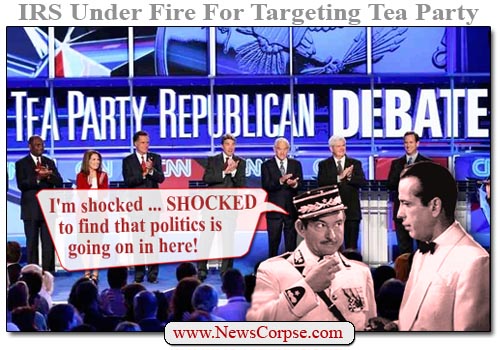 The revelation that phone records for the Associated Press were secretly subpoenaed by the Justice Department has rocked the media world. It is being portrayed as a gross violation of the First Amendment right to Freedom of the press. And no one is more outraged than congressional Republicans who have pounced on the disclosure and exploited it to elaborate on their assertions that the Obama administration has become tyrannical in their abuse of power.

However, further investigation into the controversial activity revealed that the DOJ was acting on requests from Republicans in congress who were worried that leaks to the media were endangering national security operations. So what we have here is GOP anger at the DOJ for doing what the GOP asked them to do. What’s more, the very same Republicans who are freaking out over the seizure of AP’s records, voted against a media shield law that would have made such seizures illegal without prior approval from a judge.

Another feather in the GOP cap is their persistent drum-beat of horror over what they say was President Obama’s shameful mismanagement of a diplomatic facility in Libya that resulted in the deaths of an ambassador and three other Americans. Never mind that they have never been able to tie the President to any specific action that might have made him responsible, they continue to blame him for the whole thing and are even raising the specter of impeachment.

Most recently, Jonathan Karl of ABC News broadcast an exclusive report wherein he claimed to have obtained emails from the CIA and State Department that proved that the White House tried to alter the narrative in a way that diminished the participation of Al Qaeda. This was done, Republicans allege, to benefit the President in the midst of his reelection campaign.

Like every other Republican-built scandal, this one has withered in the light of principled journalism that unraveled the embarrassing stenography practiced by Jonathan Karl. Contrary to his reporting, Karl did not actually have the emails he said he had. CBS’s Major Garrett did acquire the actual emails and reported significant discrepancies between what they said and what Karl reported. Subsequently, Karl admitted that he had only interviewed someone who said they had seen the emails and had taken notes.

As it turns out, Karl’s anonymous source was likely a Republican congressman who had seen these classified emails when they were presented in closed session by the DOJ. The source then relayed a falsified version of what the emails contained to Karl in order to damage the President. Karl graciously went along with the obviously partisan source without demanding any further corroboration. For that malfeasence, and his lying about having possession of the emails, Karl ought to be fired. Of course, he could always get a new job at Fox News where his reporting on the emails was lavishly praised. Fox then patted themselves on the back for so doggedly pursuing the phony story. 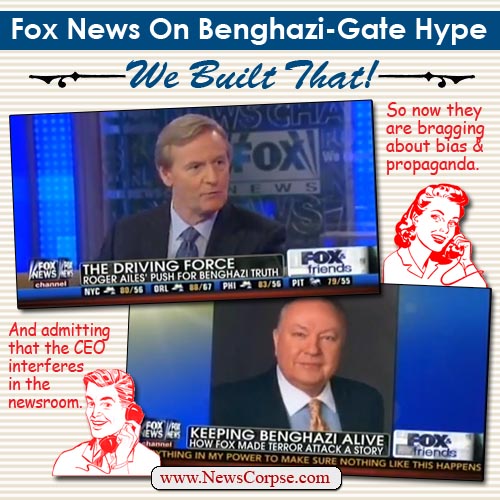 The cornucopia of crackpottery to which the GOP is clinging becomes more absurd by the hour. And yet they are feverishly pushing these fairy tales so as to avoid doing any real work. The American people deserve a legislative branch that accomplishes something every now and then. It is why they are elected and what we pay them for. Enduring countless fake scandals that have never even come close to implicating Obama in any wrongdoing is not a substitute for leadership. In fact, the only party in any of these affairs that could be guilty of a crime is the source who leaked classified information (albeit falsified) to Jonathan Karl.

Republicans are striving mightily to compare Obama to Richard Nixon and Watergate. But a more apt comparison would be Whitewater. In that trumped-up controversy Bill and Hillary Clinton were alleged to have committed everything from tax fraud to murder. But none of it proved to be true. And even after a surreal impeachment over consensual sex, Clinton rose again and Republicans lost seats in the following election. At the rate things are going, that is a likely fate for Republicans in 2014. And it would serve them right. Maybe then the country could get around to actually working on the real problems we have that affect the lives of real people – not just the political fortunes of power-hungry losers.