It’s as predictable as Glenn Beck’s tears. As soon as a president appears to be weakened by attack, the media pounces in a feeding frenzy hoping to score a kill. Some do it out of partisan animus. Some do it for personal glory. But either way it’s a bloodcurdling spectacle that contains scant morsels of actual substance.

In the present festival of feasting, many in the press are asking the same question: Have the scandals plaguing the White House created an opportunity for the moribund Tea Party to mount a revival? Take a look at a selection of the headlines:

That last one from WorldNetDaily is particularly notable because it presumes that the Tea Party has been dead, which is not something that WorldNetDaily ordinarily admits.

To answer the burning question of the day, let’s examine how the Tea Party responded to the scandal outbreak. With lightening-fast reflexes, the Tea Party Patriots organized protests across the country to “Rein in the IRS.” And their legions of followers stepped up to speak truth to power. There were 30 of them in Topeka, 70 in Phoenix, 100 in Tampa, 30 in Kansas City, 11 in Tallahassee, 100 in Chicago, 50 in Denver, 6 in Helena, and 50 in San Bernardino where they also spoke Hitlerian rhetoric to power. In the nation’s second biggest city, Los Angeles, the Teabaggers showed up 13 strong. 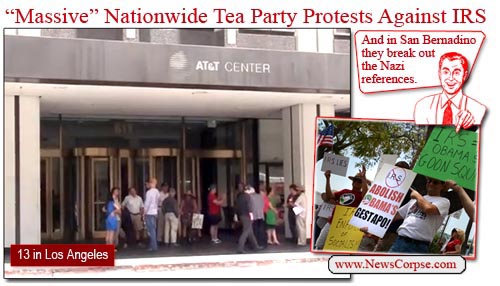 WOW! If this isn’t a demonstration of just how engaged and relevant the Tea Party is, I don’t know what would be. Clearly they have the political punch of a drunken gerbil. Nevertheless, the media will continue to prop them up as if they were actually influential. The press will ignore factual data like that presented here and fluff the baggers excitedly in the hopes of producing a climax of contrived controversy.

The truly depressing part of this is that the failure to recognize the impotence of the Tea Party will only embolden the minority fringe caucus of the Republicans in congress and encourage them to persist in their obstructionist strategy that has been so hurtful, divisive, and regressive socially and economically.

In a few weeks this will all have been forgotten and, if recent polling is any indicator, the President will be more popular than ever, and the GOP congress will hit new lows. In the meantime, it’s going to be a summer of frustration as little progress is made on the real problems that plague our nation. Too bad.

8 thoughts on “Have “Scandals” Sparked A New Tea Party Revival?”