The First Amendment holds a place of unique reverence in the hearts of Americans. Rather than focusing on a single issue, its authors packed it with critical constraints on the federal government that encompass rights pertaining to speech, association, religion, and the press. It is a mouthful of freedom that justifiably deserves special attention. However, like everything in the Constitution, it is not absolute and it requires interpretation to be understood and implemented.

With regard to recent events concerning Fox News, and its alleged reporter James Rosen, the question as to whether there was a violation of the First Amendment’s freedom of the press has roiled the media and spurred condemnation from across the political spectrum. However, no matter what one thinks about the propriety of a government agency examining the phone records of a purported journalist, James Rosen does not deserve to be regarded as one.

In the government’s affidavit supporting their request for a search warrant, a passage in the document reveals that Rosen had stepped far outside the boundaries of journalism. His activities were those of a political operative with a specific agenda that was openly hostile to the official foreign policy of the United States. And Rosen pursued that agenda with an intent to obtain classified materials that he knew was impermissible for him to possess. 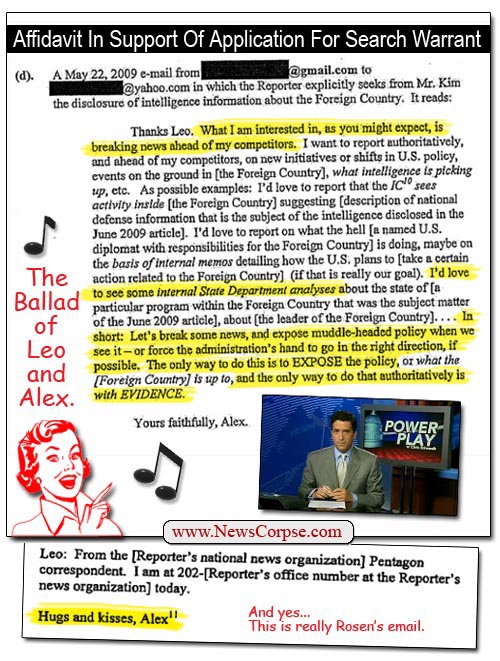 Breaking down the pertinent parts of this document, Rosen begins by admitting in an email to his accomplice, State Department analyst Stephen Jin-Woo Kim, that he is not seeking to uncover government corruption or malfeasance. [Note: in these communications Rosen used the alias “Alex,” and gave Kim the name “Leo.”] Rosen stated plainly that his interest “is breaking news ahead of my competitors.” That is a self-serving, market-driven motivation that removes any of this from comparisons to Watergate or any other whistleblowing type of activity.

The next relevant passage is Rosen’s statement saying “I’d love to see some internal State Department analyses.” That is an overt solicitation for classified information for which Rosen has no security clearance to observe, and that would (and did) subject Kim to criminal liability for disclosing state secrets. It is one thing for a government insider to voluntarily drop internal documents over the transom, but quite another for a “reporter” to deliberately coax such information from a vulnerable associate. That is more like the behavior of an agent of espionage. Elsewhere in the affidavit, Kim told FBI investigators that Rosen had used flattery and appeals to his vanity in order to elicit the secret data that Rosen later published.

But the most damning affirmation of Rosen’s complicity in unethical, if not unlawful, behavior is this passage wherein he makes a startling confession:

“Let’s break some news, and expose muddle-headed policy when we see it, or force the administration’s hand to go in the right direction, if possible. The only way to this is to EXPOSE the policy…and the only way to that is with authoritative EVIDENCE.”

Rosen’s admission that he was seeking to “force the administration’s hand” in a direction that he believes is not “muddle-headded” is undeniable proof that he was acting as an operative, and not as a journalist. If Rosen thought that the government’s policy was wrong, he could certainly say so without retribution. If he thought that the government was engaged in wrongdoing, he could certainly pursue and disclose evidence of that. But to seduce a government employee to illegally transfer classified documents in order to alter government policy merely because he disagrees with it, and absent any corruption or controversy, is a purely political act.

The facts enumerated in the affidavit clearly reveal improper behavior and intent on Rosen’s part. And it is not difficult to see why the judge, a Reagan appointee, concluded that there was probable cause to grant the request to examine Rosen’s phone records.

As I said at the beginning of this article “No matter what one thinks about the propriety of a government agency examining the phone records of a purported journalist, James Rosen does not deserve to be regarded as one.” And it is not coincidental that Rosen works for Fox News where political advocacy, not journalism, is their core mission.

Fox has been working non-stop since their inception to “force the hand” of government, and not in a good direction. Don’t forget that the CEO of Fox News, Roger Ailes, was a political operative for Richard Nixon and other ultra-rightists before he took the reins of a cable news network. And his boss, Rupert Murdoch, has spent decades exerting undue influence over governments around the world. Are the pieces beginning to fit together now? Fox News is not, and never has been, news.

[Update] Through much of this contrived controversy, Fox has maintained that they were shocked to discover that one of their “reporters” had been the subject of an FBI investigation. Now CNN reports that Fox was informed of the subpoena for Rosen’s records three years ago. So pretending to be surprised is just another gimmick to sensationalize their fake reporting.

56 thoughts on “CONFIRMED: Fox News Hack James Rosen Is A Political Operative, Not A Journalist”