“This and no other is the root from which a tyrant springs; when he first appears he is a protector.” ~ Plato 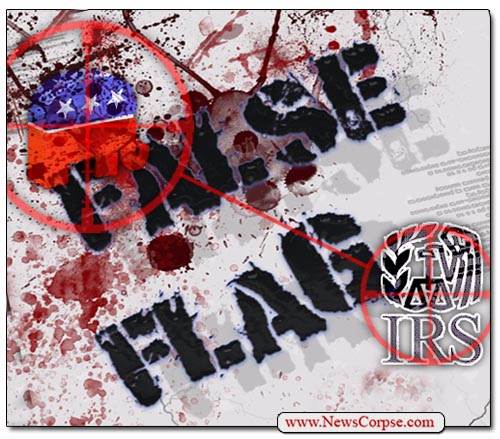 The force of fury that is emanating from Republicans in congress as they mount their crusade to ostensibly “protect” the nation from the wild excesses of a government agency gone mad has roiled the political landscape like a violently swirling tornado of partisan angst. The House Oversight Committee, chaired by ultra-rightist zealot (and recidivist criminal) Darrell Issa , has designated itself as the guardian of America’s virtue and the enemy of fiendish saboteurs in the despised Internal Revenue Service.

But there is something too convenient in the emergence of this curiously timed “scandal” that ought to raise suspicions among wakeful citizens. Think about it. The previous scandal du jour, Benghazi-Gate, was crumbling like a week-old danish. None of the frenzied allegations were panning out and, rather than diminishing the President’s reputation, his approval ratings were rising. Republicans needed a fresh dead horse to beat and suddenly the IRS dropped a gift on the GOP’s doorstep. Coincidence?

Consider further that the meat of the controversy was an astoundingly lame strategy that purported to target conservative non-profit groups for stricter scrutiny of their applications for tax-exempt status. The execution of this plan was so ineptly transparent it seems as if it was designed to be discovered. It would not have been difficult to devise a program that resulted in conservative groups being reviewed without being specific in a manner that gave away a partisan intent. But the supposed conspirators in this case used obvious language like “Tea Party” and “912 Project” to select applications to audit. That makes no sense because, if you’re trying to secretly suppress opposing political players you would try to do it secretly, wouldn’t you. What’s more, you wouldn’t leave a glowing neon paper trail that begged to be followed. Why would Democrats plotting to monkey-wrench a bunch of otherwise feeble Teabaggers, whose popularity was in rapid descent, concoct such a rickety plan?

The answer, of course, is that they wouldn’t. And to be precise, they (the Democrats) didn’t. The most prominent figures named so far in this affair are IRS Commissioner Douglas Shulman and the director of the tax-exempt organizations division, Lois Lerner. Both are Republicans brought into their government jobs by George W. Bush. Remember, he’s the guy who politicized the IRS by challenging the tax status of the NAACP, Greenpeace, and even liberal churches. He also politicized the Department of Justice by firing nine U.S. Attorneys who were appointed by a Democratic president. [Update: Congressional investigators reveal that the IRS manager who initiated the Tea Party inquiries is a conservative Republican].

When assessing the facts of this plot it can hardly be regarded as insignificant that the lead plotters were Republicans. Furthermore, the first disclosure that something was awry at the IRS was not made by an intrepid investigative journalist tracking down corruption in the system. It was revealed by Lerner, who planted an aide in a public meeting to ask her about the partisan targeting. So it was actually Republicans in the IRS who cooked up the policy and then leaked it to the media via subterfuge. Why would they do such a thing?

In the process of investigating clandestine operations there is a common inquiry designed to lead to the perpetrators: “Cui bono,” or who benefits? Clearly the activities attributed to the IRS have almost no beneficial value to Democrats. After all, not a single one of the groups subjected to review were denied tax-exempt status. And since the law permits non-profits to solicit tax-exempt donations while their applications are in process, no fundraising was hampered. If this were a plot by Democrats to harm political opponents, why would they stop so far short of their goal and openly advertise their misbehavior? It seems more like a scheme to get the Democrats blamed for trying to harm Republicans without resulting in any actual harm. That would be a scenario that benefited the Republicans, who just happened to be in a position to orchestrate it.

So the GOP had motive, opportunity, and all of the available evidence that was provided and exploited came from Republicans intent on disabling a Democratic administration. It was timed to a news cycle that would otherwise have boosted President Obama’s agenda as the economy showed signs of improvement, jobs were on the rise, and major legislative initiatives like immigration, gun safety, and climate change, were gaining momentum. The lead investigator in the House (Issa) is a known crook who was informed of the IRS activities a year ago, but waited until all the pieces were in place to launch his witch hunt.

This affair smells fishy from the get-go. It was made for media consumption. Nobody got wound up in the Benghazi story because there was no easy handle for malicious reporters to grab unto, or for the public to readily grasp. But everybody already hates the IRS, so fabricating an abuse of power fable has built in appeal. That’s how you end up with wild stories about the IRS Commissioner visiting the White House 157 times, with insinuations that he was conspiring with the President. When a legitimate news reporter followed up, there were far fewer visits (perhaps as few as eleven) and they were all to attend meetings, with people other than Obama, related to the implementation of the health care bill.

However, accuracy and honesty were never a part of the brazen hype machine that has been pumping out the lurid allegations and wispy rumor mongering that Republicans have embraced as their replacement for evidence and facts. The truth is merely an obstacle to the fulfillment of the GOP’s agenda. But it is becoming more apparent every day that the truth may have more to do with Republican malfeasance than that of Democrats. And anyone who dismisses the role of Republicans in creating and executing this alleged scheme is willfully blinding themselves to the reality that the GOP had far more to gain by manufacturing this scandal than the Democrats would have had in carrying out something so inept and ineffective.

[Authors Note: If you got this far I would like to reveal now that I don’t believe for a second that the IRS affair is a false flag operation by the GOP. While all of the facts presented above are true, the conclusion is a farce meant to illustrate how different the crazies on the right are from the crazies on the left.

Conservatives would have jumped on a story with the factual details that this one has and propagated, in all seriousness, the conspiracy theory that I outlined above. Glenn Beck, Alex Jones, Rush Limbaugh, and even congresspersons like Michele Bachmann and Louie Gohmert would be polishing their tin-foil hats right about now. However, despite the ripeness of these facts, there is no one on the left pushing such a conspiracy theory.

Just a little something to ponder when right-wingers seek to make phony arguments of equivalency whenever they are caught doing or saying something that is monumentally stupid.]

28 thoughts on “Is The IRS/Tea Party Affair A False Flag Operation By GOP Operatives?”