In what may be the biggest scandal in the history of journalism, Rupert Murdoch’s News Corporation was caught hacking into the phones, emails, and computers of thousands of people, including private citizens, royals, celebrities, politicians, and even a kidnapped schoolgirl who was later found dead. It’s a story that got international attention everywhere but on Fox News, where Murdoch explicitly refused to discuss it with his sycophantic anchorman.

The fallout from that affair has been wide-reaching with dozens of News Corp. employees arrested and/or fired. Murdoch’s CEO of the UK publishing division is currently awaiting prosecution. The “News of the World,” at the time England’s largest circulation paper, was shut down. And today the Telegraph is reporting that Murdoch’s News Corporation expects that it…

“…will pay to put an end to the [U.S. Department of Justice’s] investigation into the company’s UK newspaper arm, News International, before it goes to a full trial.

“The DoJ is investigating News Corp for potential breaches of America’s Foreign And Corrupt Practices Act, which outlaws police bribery and can result in major penalties.”
[…]
“It has been reported that it could agree a settlement of $850m or more.”

If Murdoch is willing to shell out nearly a billion dollars to make this go away, he is in effect admitting guilt. That is not exactly a figure consistent with a nuisance suit. To be sure, Murdoch has a lot riding on this. His son James is in the legal line of fire. The recent corporate split dividing his news publishing division from the entertainment group will put more pressure on the news side to be profitable, and a criminal investigation won’t advance that goal. (Side note: Fox News was placed in the entertainment group when the companies split). 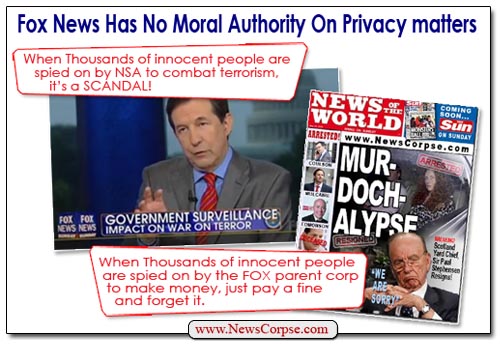 It is still somewhat surprising that news of these shenanigans have not been covered in much detail here in the U.S. Particularly in light of the near hysteria over the NSA’s collection of the phone records of Americans not suspected of any wrongdoing. This disparity in reporting reveals an egregious hypocrisy. Why is Fox News so outraged over the privacy violations of a government agency that justifies its actions as necessary to obstruct terrorists, but they aren’t the least bit concerned about privacy violations by a corporation whose only justification is greed?

Obviously, the answer is that Fox News has a vested interest in suppressing news that reflects poorly on itself. But just as much, they have a partisan interest in hyping news that damages their political enemies. And for both of these reasons, Fox should never be referred to as a “news” network. They are an ultra-rightist PR agency. They should not be allowed to buy their way out of legal jeopardy. Those responsible for the hacking deserve to be tried, convicted, and punished. And that includes Murdoch.