One of the few encouraging aspects of the current controversy over the privacy intrusions of the NSA is that civil libertarians from across the political divide are in agreement that government is overstepping its authority. When both Michael Moore and Glenn Beck say that whistleblower Edward Snowden is a hero, there seems to be a ray of hope that something might be done about rolling back the invasive policies of George Bush’s Patriot Act Doctrine.

Of course, it is way too much to expect the serial liars at Fox Nation to embrace a moment of bipartisanship and parlay it into constructive action for the betterment of America. Their headline this morning mutilates the substance of a new poll by the Pew Center and the Washington Post: 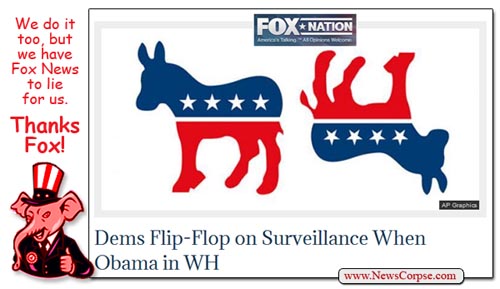 Get the acclaimed ebook Fox Nation vs. Reality at Amazon.com

By declaring that “Dems Flip-Flop on Surveillance When Obama in WH,” the Fox Nationalists ignore the fact that Republicans flipped also. In fact the Democrats’ flip was almost identical to the Republicans’ flop. The Washington Post, whose headline (“Who loves surveillance? It depends who’s in the White House”) was accurate, reported the poll’s results showing that Democrats’ approval for national security over privacy increased by 27 percentage points since the Bush years. On the GOP side such approval dropped by 22 points. The plain conclusion is that approval is often a function of who’s doing the snooping. But Fox read these poll results and deliberately misrepresented the facts to show only a flip-flopping Democratic position.

Additionally, there is some nuance to the variations in the poll questions asked. In 2006, Democrats expressed their disapproval of Bush’s policy because it eavesdropped on the actual phone conversations without obtaining a warrant. Today Democrats are expressing approval of a policy that does not listen in on the calls, but only stores information like phone numbers and dates. Plus, Obama’s NSA gets a court’s OK to do even that. This mitigates to some extent the degree of flipping that can be attributed to the Democrats.

What does not change is the fact that no administration should be permitted to broadly collect private data on American citizens who are not under investigation for some criminal activity. That principle is being advanced by conscientious Americans of all political stripes. It’s unfortunate that Fox is so obsessed with partisan animus that they cannot fairly report a story that unites the nation. Rather than being honest and responsible, Fox is being divisive and is creating barriers to moving the nation in a positive direction that even their own viewers would support.