In 2008 California passed the Prevention of Farm Animal Cruelty Act with a 63% majority. The new law established humane confinement standards for certain farm animals including egg-laying hens. A subsequent law extended the standards to all eggs imported from other states for sale in California. Now, this democratic expression of compassion is being attacked by Steve King, a Tea Party congressman from Iowa who thinks the Founding Fathers advocated liberty and animal torture for all. 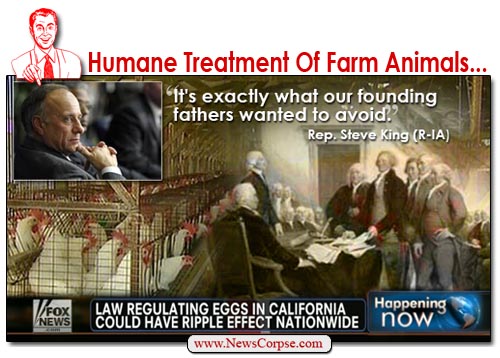 King has proposed an amendment to a pending federal farm bill that would supersede California’s law and allow farmers in other states to sell eggs in California regardless of their inhumane practices. In justifying this amendment, King argues that states must not be allowed to set local standards and that the federal government should intervene and force states to comply with a national set of rules. Such decisions at the state level that protect animal welfare are, he says, “exactly what our founding fathers wanted to avoid.” That contradicts his position on just about every other law where he believes the feds should stay out of the state’s business. He is a fierce proponent of state’s rights, for instance, when it comes to abortion or gun registration.

King is a confirmed birther who has long held positions that advance animal cruelty. He is a vocal advocate of legalizing dog fights, which he believes are no different than professional boxing among humans who have the luxury of deciding for themselves whether to participate and are not murdered if they lose. King even voted against a law to ban children from dog fighting events. However, there is a certain perverse consistency in his philosophy. Just as he opposes legislation to address violence against animals, King also opposed the Violence Against Women Act. Apparently women, in King’s view, are no better than animals, a position he has also taken with regard to immigrants.

King’s opinion that the California statute violates the commerce clause of the Constitution is unfounded. But worse, it perpetuates a practice of cruelty that compassionate Americans have the right to reject. It also contradicts his core belief system with regard to what he would call “big government.” Thus, it demonstrates a measure of hypocrisy that exceeds all reason. And when he brings the Founding Fathers into it, he just sounds delusional.

[Update] Stephen Colbert added his voice to this issue last night with a brilliant segment that rips King apart.