The race to fill John Kerry’s senate seat in Massachusetts has never been much of contest. Democrat Ed Markey has led Republican Gabriel Gomez from the start and in the few days left before next Tuesday’s election, he has expanded to his lead to up to 20 points in some polls. But that hasn’t stopped Fox News from brazenly trying to manipulate the outcome by juicing their coverage of the race in favor of Gomez. 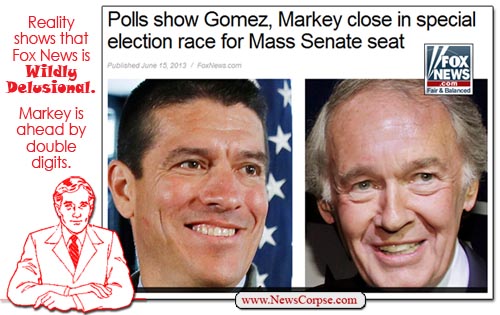 Having concluded that their efforts to boost the Gomez candidacy with phony polling analysis and swipes at Markey, Fox News is ramping up their game in a last ditch attempt to put their man in the senate. Tomorrow, on Fox News Sunday, they will feature an interview with Gomez, just two days before the election. That’s a pretty generous donation of valuable air time on a nationally televised program. Any candidate would be thrilled to get that much free publicity.

However, Ed Markey isn’t so fortunate. The “fair and balanced” folks at Fox will only be hosting Gomez at this critical juncture in the campaign. In fact, Markey has not been on Fox at any time during this campaign, while Gomez has been featured multiple times. And Fox always allows Gomez to advertise his web site and plead for donations.

The booking of Gomez on Fox News Sunday is just another example of how Fox has established itself as the PR agency for the Republican Party. There is no more reliable ally for GOP candidates, particularly when they are desperate and appear to be trailing badly. And even when the candidate isn’t available, the Fox anchors and pundits are there to lavish praise on them and to smear their Democratic opponents. It’s a valuable service/scam for which the candidate doesn’t have to shell out a single penny.