No one is surprised anymore when Fox News brazenly brandishes their rightist leanings or promotes Republican candidates and causes. Anyone who is paying attention recognizes that Fox is the PR arm of the GOP. But having established that fact, Fox is now swinging for the fences and attempting to take the mantle of fringe fictionalists from the likes of Glenn Beck and Alex Jones.

The media is clearly obsessed with this new melodrama revolving around Edward Snowden and the international chase scene that has reporters racking up frequent flier miles and dreams of sky-high ratings. They would like nothing better than a helicopter hovering over a white Bronco as it tracks Snowden to some exotic tropical sanctuary. Every media whore in the business is weighing in. 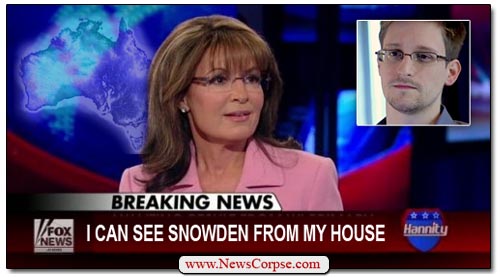 So it goes without saying that this morning on Fox & Friends, the kiddies on the curvy couch hosted national joke and Hair Club for Dicks spokesman, Donald Trump, to discuss the Snowden affair. Trump wasted no time in sensationalizing the matter with his typically shallow analysis by calling for Snowden (who has been convicted of nothing) to be executed and blaming Obama for everything. But Trump’s outraged is not reserved for Snowden alone. When he was asked what he thought about the newspapers that published Snowden’s documents, Trump said that it was “disgraceful.” So he is not only opposed to whistleblowers, he also opposes journalists. He even managed to inject a swipe at Climate Change when he mentioned some nonsense about magazine covers in the 1920’s reporting global cooling.

However, the focus was squarely on Snowden as Trump implied that America is weak and in danger of imminent extinction. Although, in the minds of these extremist right-wingers, America is always mortally threatened by whatever their issue du jour might be, whether it’s health care, immigration, or totalitarian bicycles (seriously). But the wheels really came off the interview when Trump segued from Snowden’s flight to his favorite subject, the President’s birth certificate.

Trump: You know the only thing we don’t seem to get are the records from the President. Isn’t that interesting?
Brian Kilmeade: Yeah, no one leaks that.
Steve Doocy: Yeah, where are those?

Yeah! How come that Kenyan socialist Muslim doesn’t release his records – again? Why is continuing to deceive the American people about his foreign nativity and his phony academic resume? And when will he come clean about his real father being former domestic terrorist Bill Ayers? And what his Marxist upbringing, his gay husband, and his alien reptilian body that lies beneath that human costume he wears?

America wants to know. And thank God for Fox News – the only media outlet courageous enough to ask these questions. As for Snowden, if he really wants to gain some credibility with the Free Speech crowd, he should show up in Red Square wearing a Free Pussy Riot t-shirt while he’s in Russia. 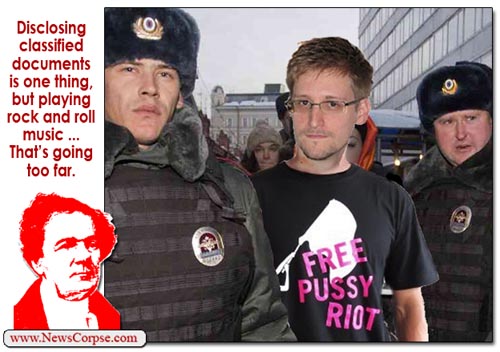