“President Obama seems determined to punish and wipe out economic success in this country, leveling tax weapons of mass destruction on all taxpayers.”

You have to wonder what point West is attempting to make. Does he really want to analogize alleged defects in Obama’s tax plan with weapons of mass destruction that turned out to be non-existent? That would mean that the defects West is assailing are not really there. In effect, West is making an analogy that affirms the worthiness Obama’s proposals and reminds listeners of the GOP’s deceptions. Nice work, Allen. And if that wren’t enough, West also said that…

“Although he has never served our country in uniform, or risked his life to defend its freedoms and liberties on distant shores, it seems President Obama understands a thing or two about weaponry.”

Here West is taking another opportunity to remind listeners of something that reflects worse on him than his target. Obama may not have served in the military, but he also wasn’t reprimanded, fined, and nearly discharged dishonorably for engaging in torture, as West was.

Patrick Murphy is West’s Democratic opponent for the 18th district seat in Florida. Feel free to help him out. 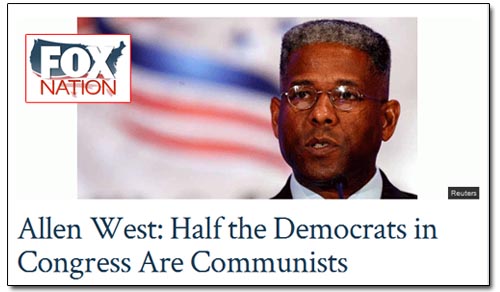 It doesn’t get any more bizarre and disgusting than this. Florida congressman, and Sarah Palin’s choice for Mitt Romney’s running mate, Allen West, has once again uttered something so ridiculous you can’t help but wonder if he is deliberately engaging in some sort of performance art. Let’s go to the videotape:

Moderator: What percentage of the American legislature do you think are card-carrying Marxists or International Socialist?

West: It’s a good question. I believe there’s about 78 to 81 members of the Democrat Party who are members of the Communist Party. It’s called the Congressional Progressive Caucus.

Perhaps West would like to reinstate the House Un-American Activities Committee. Maybe he has a list of communists in his hand he would be willing to share with us. Would he like to start blacklisting people again? That went over so well the first time. 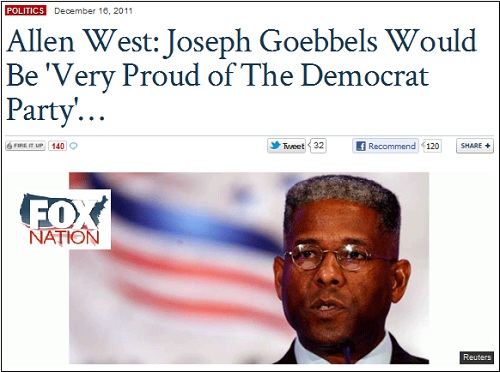 Allen West is a certified whack-job. It is utterly unfathomable how he could have been elected in the first place, and it boggles the mind to imagine that he might be reelected in November. The folks promoting him as a vice-presidential candidate (Herman Cain joined Palin) are lunatics. West has not even completed his first term in the House and already he has racked up a repulsive record of vile commentaries that rely heavily on references to Nazis.

Among those promoting West are the propagandists at Fox News. Their Fox Nation approvingly posted this video and their readers posted comments that praised West for his “courage.” To be clear, they are referring to the courage to make wild, unsubstantiated accusations about the treasonous subversiveness of his colleagues in congress. And if you’re concerned that he might have been taken out of context, his spokesperson helpfully clarified what he meant:

Well then, that clears that up. If this guy is reelected there is something seriously wrong with Florida’s 22nd congressional district. Anyone who wishes to help retire West can visit these sites:

Patrick Murphy for Congress
Take Down the Tea Party Ten

Allen West is representative from Florida’s 22 district with a unique vision of America. It’s a vision that permits only his interpretation of what constitutes American values. Stray from West’s dictatorial creed and you are not fit to be an American and must be banished. Never mind free speech and other Constitutional guarantees of liberty, it is West’s proclamation of patriotism that counts and nothing else. In that spirit West told his comrades at a Republican Party event (video below) that…

In that short paragraph West has expressed a perverted view of Constitutional liberties, denied the freedom of expression to elected representatives, and asserted what amounts to a declaration of civil war. This beacon of intolerance cannot grasp the the fact that his disparagement of his perceived political enemies in Washington, extends to the millions of Americans who voted for them. He might as well be telling half the nation to get the hell out of the nation.

West is serving his first term in the House, and maybe his last if his district has any sense. His brief time in public service follows a military career that ended in disgrace after he interrogated an Iraqi police officer (who was never found to have done anything wrong) by firing a bullet just past his head. Since becoming a congressman West has made an embarrassing spectacle of himself by hiring an aide who riled up a Tea Party rally by saying that “If ballots don’t work, bullets will.” And despite his collegial reference above to his “dear friend the chairman of the Democrat National Committee,” he previously said this about her:

“You [Rep. Debbie Wasserman Schultz] are the most vile, unprofessional, and despicable member of the US House of Representatives.”

West also seems to have caught Nazi Tourette’s Syndrome from Glenn Beck. He can’t seem to stop using Nazi references almost every time he stands to speak. Here’s an example that Fox News was so impressed with they featured on their Fox Nation web site:

There many more examples at the link above. This is the character of Allen West. He is a disreputable purveyor of hate and an advocate of violence and suppression of free thought. The good news is that he is also a vulnerable incumbent who is likely to be a one-term congressman. You can help to affect that outcome by supporting the CREDO SuperPAC to Take Down the Tea Party Ten. Sign the petition and make a donation today.

Fox Nation, the web site of Rupert Murdoch’s Fox News, may have lost Glenn Beck and his Nazi Tourette’s Syndrome, but they needn’t worry as long as GOP representative Allen West is around:

West’s apparent Nazi Neurosis has been in effect for quite some time. Here is a sampling of his references to the regime that he can’t stop dreaming about (including the one from yesterday):

“If Joseph Goebbels was around, he’d be very proud of the Democrat Party, because they have an incredible propaganda machine.”

“In 1930 there was a gentleman in Germany who took away private gun ownership. And you know what happened to that population. You must be well-informed and well-armed because this government that we have now is a tyrannical government.”

“If we allow those Gestapo-type intimidation tactics to prevail in the United States of America, what happens to our liberties?”

“In reviewing history, I would say Sir Neville Chamberlain was naive in his negotiations with German Chancellor Adolph Hitler. However […] I cannot attribute this incompetent statement [by Obama] to naivete, but rather to conscious, nefarious, and malicious intent.”

“Mainstream media’s is no longer reporting the news, they are propagandizing and I think that is another dangerous situation that we find developing in the United States of America […] Goebbels is doing somersaults and back flips in his grave.”

West has been admonished in the past for his insensitive exploitation of the horrific atrocities of Hitler and his Nazi Party. He has been condemned by Jewish and civil rights groups. And his usual response is to stiffen his resolve and defend his unconscionable rhetoric.

By repeatedly assaulting his political opponents with talk of Nazis, he trivializes the very real pain and loss of millions of victims and soils their memory. And Fox News is equally accountable for promoting West’s offensive behavior.