The Senate Judiciary Committee will hear from both Brett Kavanaugh and Dr. Christine Blasey Ford today in an attempt to resolve the controversy over whether Kavanaugh had engaged in sexual assault. Unfortunately, this Senate process is woefully insufficient to actually resolve such a question, but it’s the only thing the Republicans will allow. 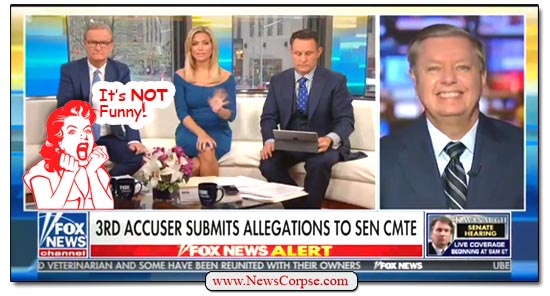 Prior to the hearing, Fox News was setting it up in a manner that blatantly advantaged Kavanaugh. In a segment on Fox and Friends with Sen. Lindsey Graham, the Senator is heard laughing during a discussion of parties where women were allegedly drugged and raped. That’s an unambiguously inappropriate response under the circumstances. But he doesn’t behave any better as the interview proceeds, as observed in this exchange about the declaration provided by another accuser, Julie Swetnick (video below):

Anna Kooiman: Here’s the problem Senator. We’re not saying that nothing happened to her. It’s serious allegations. Something might have happened to her. We are all just questioning why she didn’t go to police. She says that she was raped at one of these parties. Not by Kavanaugh. Someone else. So people are wondering why didn’t she go to police when that happened. Or why isn’t she going to police now? [She’s asking for an FBI investigation]
Graham: Well here’s what I would say. Y’all are very nice people. I don’t buy this. I don’t believe that any reasonable person would go to a party where people are being drugged and raped and not tell anybody about it, but keep going for ten times over a two year period. Brett Kavanaugh’s life – there’s no indication that that’s the kind of person he is. This lady, Brett Kavanaugh says ‘I never met her’. Avenatti is her attorney. If you can’t figure this out, then there’s something wrong with you.

Graham went on to repeat his surprise that Ms. Swetnick continued going to parties while in college. And he summed up by stating flatly that “Brett Kavanaugh is not a serial rapist,” revealing that his mind was already made up before anyone has testified.

However, Graham’s characterization of Swetnick’s declaration is patently false and even absurd. He’s implying that she willfully attended regularly scheduled rape parties. But she never said anything of the sort. Her testimony is that she attended ten parties, in two years, where she observed this repulsive behavior. Graham is asserting by assumption that those were the only parties she attended. It’s more likely that she attended many more.

If we estimate that she attended one party a week during these two years of college (a conservative estimate), that’s 104 parties total. She wasn’t deliberating attending parties where such activity was advertised and tolerated. So at ten of these parties – out of more than a hundred – she happened to encounter some disgusting individuals like, allegedly, Kavanaugh.

Graham’s attempt to portray Swetnick as someone who regularly and deliberately attends rape parties is just plain nauseating. And it’s proof of his intent to malign her character. Furthermore, his snide reference to to her attorney, Michael Avenatti, was also meant to disparage her and dismiss her testimony. Never mind that Avenatti has provided remarkably precise and accurate commentaries on everything from Kavanaugh to Michael Cohen, and of course, Stormy Daniels. Graham, on the other hand, has proven to be a sleaze ball who sucks up to Donald Trump and abandons every speck of integrity or dignity he might have ever had. Just sayin’.

"I don't believe any reasonable person would go to a party where people are drugged and raped and not tell anybody about it… Brett Kavanaugh is not a serial rapist." pic.twitter.com/NI1tfcinFE 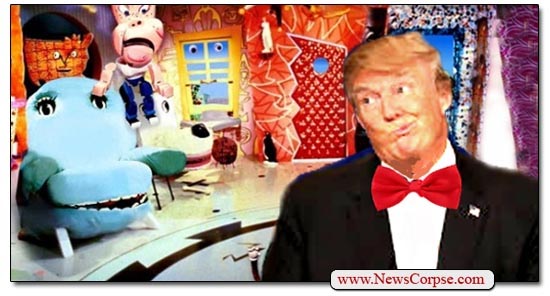 Earlier this week Fox News hosted Steven Emerson, an alleged terrorism expert, who claimed that the entire city of Birmingham, England was occupied by radical Muslims and was inaccessible to anyone else. His remarks were widely ridiculed, including by David Cameron, the British Prime Minister, who called Emerson an “idiot.” Emerson later recanted and apologized for his “terrible error.” But Fox wasn’t done embarrassing itself with false tales of horror. 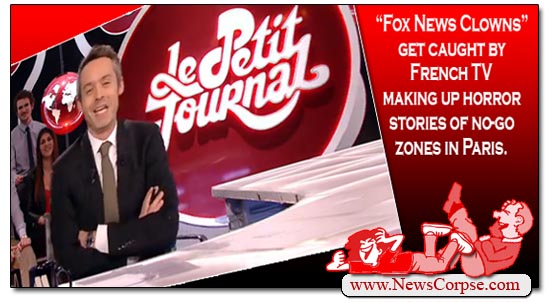 Over at Fox & Friends, Elisabeth Hasselbeck interviewed a former Air Force pilot who claimed to have personal knowledge of the deterioration of French society. Nolan Peterson said that there were “741 no-go zones throughout France.” Peterson described his adventures in the wilds of Paris saying that…

“It was pretty scary. I’ve been to Afghanistan and Iraq and Kashmir, India, and at times it felt like that – those places in these no-go zones. […and that…] You see young men wearing Osama Bin Laden t-shirts in a hookah shop.”

Really? This veteran of Afghanistan and Iraq was scared of Paris? The segment was seen by Yann Barthès, the host of the French television program “Le Petit Journal.” His response was to mercilessly flog Fox and Peterson while exposing the glaring errors in their analysis. For instance, Fox made reference to a poll that said that 16% of the French people had a favorable view of ISIS. However, that poll was debunked by the Washington Post, a point that Barthès noted.

Fox also displayed a map of the so-called no-go zones in Paris which brought spontaneous laughter from the residents of Paris in the audience who knew better. In fact, the map was a document that indicated urban renewal areas where the government would direct resources for improvement. It had nothing to do with Muslims or terror. But Fox’s “mistake” inspired Barthès to courageously send his crew into the falsely slandered no-go zones for some person-on-the-street interviews. And just to be on the safe side, they were suited up in safety gear and helmets, which turned out not to be necessary.

Fun Fact: Bill O’Reilly declared a boycott of France in 2007 because they refused to support George W. Bush’s invasion of Iraq. In fact, you can still buy a Boycott France Bumper Sticker from his website.

[Update 1/18/2015:] So, after Fox News characteristically resorted to fear mongering and spreading disinformation, their lies on this occasion were so egregious that they were forced to apologize – FOUR TIMES!

For the record, the apologists were Anna Kooiman, Eric Shawn, Julie Banderas, and Jeanine Pirro. Don’t hold your breath waiting for Fox to do this the next time they lie (which happens multiple times every day).