On Monday evening Donald Trump’s White House took the extraordinary step of parading its Supreme Court nominee, Brett Kavanaugh, out on State TV (aka Fox News), to whitewash the charges against him for sexual assault. That spectacle only exacerbated his problems by revealing him as awkward and over-coached in his own defense. And it doesn’t help that he was defending himself on the network best known for political partisanship and employing sexual predators. 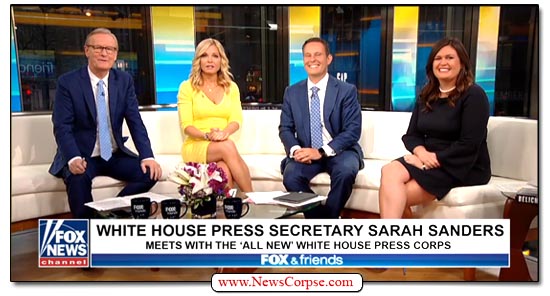 However, this tactic on the part of the administration further illustrates just how reliant they are on disseminating propaganda via Fox News. It’s their go-to media fixer when Trump is in trouble or they have some new unpopular initiative to foist on the nation. And in a totally unprecedented course of action, the White House has virtually eliminated the Daily Press Briefing as a means of informing the public about administration activities. They have replaced it with Fox News.

Trump’s Press Secretary, Sarah Huckabee Sanders, has held only one briefing so far in the month of September. She held only five briefings in June, three in July, and five in August. That’s one hundred and seventeen days with only fourteen “daily” briefings. This makes it far more difficult for reporters to gather information that the public deserves and is entitled to in a working democracy. Clearly Trump prefers to operate like the dictatorships he so admires in Russia and North Korea.

So the day following Trump sending off his Supreme Court nominee to the happy place for rightist news, he sets up a playdate for Sanders with his Fox and Friends. Sanders joined the “Curvy Couch” potatoes for an extended discussion on how splendidly everything is going in the White House and in America (video below). She stuck up for Kavanaugh, dismissed the controversy over Deputy Attorney General Rod Rosenstein, effusively praised her boss, and promoted the upcoming cookbook by Fox co-host Steve Doocy that contains a recipe by Sanders.

This performance is a poor substitute for briefings attended by diverse and independent journalists. Rather, it is an extension of Trump’s determination to turn the White House into a Reality TV melodrama with all the nonsense and artifice that implies. They aspire to lull the American people into a stupor that will be thrilled by the circus-like antics of a Big Brother presidency.

Unfortunately for Trump, just because his cult followers are foolish enough to fall for that, doesn’t mean that the rest of the country will. And even with his reincarnation of Goebbels (former Fox News president, and current White House Deputy Chief of Staff for Communication, Bill Shine), Trump isn’t going to find success in dumbing down America’s democracy. He’s only going to make sure that his Deplorables remain utterly and painfully clueless. Just the way he likes them.