It’s becoming more obvious every day that Donald Trump has no core principles. His moral code is strictly set to advancing whatever is in his best interest at the moment. That explains his frequent flip-flops on issues and fluid allegiances with associates. The velocity with which he can change positions is blinding. Take for example his stance on the Electoral College. 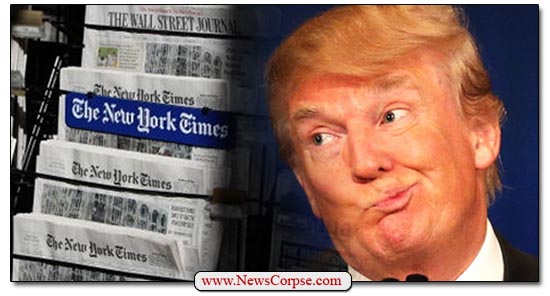 Now the Washington Post is reporting that Trump dined with Mexican billionaire Carlos Slim. The news that Trump is hobnobbing with yet another billionaire isn’t exactly groundbreaking. He has already stuffed his cabinet with more of them than any of his predecessors. They seem to be the only people with whom he has any relationship.

What’s notable about this tryst is that Trump hasn’t been particularly fond of Slim, his homeland, or his business portfolio. You have to wonder what Trump’s after in inviting such a bitter foe to his luxury Mar-A-Lago resort. Trump viciously castigated Slim during the campaign, primarily for his investment in the New York Times. He said this at a rally in North Carolina on October 14:

“No paper is more corrupt than the failing ‘New York Times.’ The good news, it is failing, it won’t be around too much longer. But they are really, really bad people. The largest shareholder in the Times is Carlos Slim. Now Carlos Slim as you know comes from Mexico. He’s given many millions of dollars to the Clinton and their initiative. So Carlos Slim, largest donor of the paper, from Mexico. Reporters at the New York Times, they’re not journalists. They’re corporate lobbyists for Carlos Slim and for Hillary Clinton.”

First of all, Slim is indeed a large shareholder in the Times, but Trump is telling only part of the story. Slim’s 17 percent of the publicly traded Class A shares does not give him any clout. The vast majority of the company is owned by the Sulzberger family, including the privately held Class B shares. Additionally, Slim has no representation on the company’s board of directors. So Trump’s inference of influence by Slim is entirely a product of his warped imagination.

Secondly, the fact that Trump had to mention Slim’s Mexican heritage twice reveals the deep roots of his bigotry. He doesn’t say why it’s important, he just makes sure his audience is well aware of it.

Thirdly, Trump points out that Slim has donated to the Clinton Foundation. However, he doesn’t bother to mention that he gave $100,000 to the Foundation himself. If he’s implying that Slim was seeking some sort of benefit for his donation, then what was Trump seeking?

Finally, Trump makes a leap of illogic to assert that the reporters for the Times are somehow beholden to the Clintons. There is nothing to indicate that the Times’ reporters are in any way influenced by Slim or donations to the Clinton Foundation. This is the sort of dishonest innuendo that Trump has disgorged throughout his campaign.

So now Trump is dining with Slim and praising him as “a wonderful man” Never mind that his website still says this about him:

“The New York Times strings are being pulled by Mexico’s Carlos Slim, a billionaire who benefits from NAFTA and supports Hillary Clinton’s open border policies.”

If any of Trump’s speculative accusations were to be taken seriously, then you would also have to apply them to his reasons for meeting with Slim now. Is Trump a shill for Slim and the Clinton Foundation? Or is he just an opportunistic con man who is out for anything he can get for himself? You don’t have to answer that.

To say that Donald Trump is no friend of a free press is an understatement of Olympian proportions. His open hostility toward the media generally, and journalists individually, virtually drips with white hot hatred. And his animosity is focused solely on his own self-interest and his paranoid perception that everyone is against him.

As a result, Trump has treated the press like cattle, forcing them into cramped pens at his rallies. Then he points them out to his followers as “disgusting scum” and jokes about killing them. And those are the lucky ones who didn’t have their credentials revoked.

As the campaign progresses and Trump’s prospects for victory dwindle, he is getting even more maniacal in his rage against the media. Now he has issued a statement spurred by the recent bid by AT&T to acquire TimeWarner. The content and tone of the statement should worry every American who values the First Amendment of the Constitution. It was written by his Senior Economic Advisor, Peter Navarro, and addresses a very real problem: Monopoly Power of New Media Conglomerates. The problem is that he twists the whole subject into an ego-driven tirade against his perceived enemies. It’s opening paragraph states that:

“Over a hundred years ago, a pro-business Teddy Roosevelt busted up more than 40 oil, railroad, steel and other ‘trusts’ that were wielding their rapacious monopoly power to gouge consumers and interfere with the efficient functioning of the American economy. Donald Trump will break up the new media conglomerate oligopolies that have gained enormous control over our information, intrude into our personal lives, and in this election, are attempting to unduly influence America’s political process.”

Not bad, so far. But rather than making a reasoned argument against the concentration of corporate interests, he turns it into a political diatribe. He complains that these media monopolies are “the very same media conglomerates now pushing Hillary Clinton’s agenda.” Then he singles out “NBC, and its Clinton megaphone MSNBC,” for “engag[ing] in their Never Trump tactics.” With regard to the AT&T/TimeWarner deal he ignores the anti-trust issues and instead whines about “the wildly anti-Trump CNN.”

Moving on to the newspaper sector, Trump seems to be obsessed with the ownership of the New York Times. That’s likely because one of the its biggest shareholders is the Mexican billionaire, Carlos Slim. Just like with the judge in his Trump University fraud case, Trump is offended that anyone with Mexican heritage is permitted to do business in America. For the record, Slim owns 17 percent of the publicly traded Class A shares of the Times. The vast majority of the company is owned by the Sulzberger family, including the privately held Class B shares. Additionally, Slim has no representation on the company’s board of directors. So Trump’s inference of influence by Slim is entirely a product of his warped imagination.

Notice anything missing from this unhinged harangue? Trump never mentions Fox News, one of the biggest media conglomerate in the world. It’s reach extends to news, entertainment, television, films, publishing and digital media, on an international scale. It’s clear that Trump only has a problem with media monopolies that he doesn’t like. Conservative oligopolies are A-OK in his book. And if it weren’t obvious enough, Navarro went on Fox News where he was asked by Neil Cavuto if Trump aimed to break up existing media companies. Navarros’s answer: “Not this one, Neil.”

So, as long as you don’t piss off President Trump you’re free to be an abusive monopoly. Otherwise, watch out. But that isn’t how a free press works. To the contrary, that’s how a fascist dictatorship works. And Trump reiterated this position Sunday in an interview with the local CBS affiliate in Miami (video). He was asked “Do you think there is too much protection allowed in the first amendment?” He responded by advocating for the system in England where he thinks it’s easier to sue the media. Continuing, he said that “Our press is allowed to say whatever they want and get away with it.”

Let that sink in. Trump favors a foreign system where there is no First Amendment, which he believes allows for “too much protection.” And he is troubled that the press in the United States is “allowed to say whatever they want.” OMG! Somebody needs to put a stop that sort of freedom right away. And who better than Trump, who in the same interview declares that “I’m a big believer – tremendous believer of the freedom of the press. Nobody believes it stronger than me.” Uh huh.

That must be why prominent advocates for freedom of the press have made scathing denunciations of Trump. The Committee to Protect Journalists blasted him as “an unprecedented threat to the rights of journalists.” The National Press Club condemned his anti-press tactics as “unacceptable and dangerous to our democracy.”

This new statement by Trump on media monopolies is just another self-serving scam intended to advance his personal interests and punish his foes. The blatant partisanship baked into it disqualifies it from serious consideration. Concentration of power in a shrinking corporate media landscape is a truly disturbing development that needs to be addressed. But it isn’t addressed by a policy of clamping down on political adversaries as revenge for honest criticism. Trump can do that on his TrumpTV, if he’s foolish enough to actually launch it. Fortunately for America, it won’t take very long for that to devolve into a HUGE and humiliating catastrophe.