Tough-talking Donald Trump has proven again that his macho image is as phony as a diploma from Trump University. Within a couple of hours of his first post-Orlando speech, wherein he ranted about the evils of “radical Islamic terrorism” and the traitors who refuse to say those three magic words, Trump announced that he was too scared to face the bone-chilling visage of reporters from the {shudder} Washington Post. He posted a message on Facebook declaring that…

“Based on the incredibly inaccurate coverage and reporting of the record setting Trump campaign, we are hereby revoking the press credentials of the phony and dishonest Washington Post.” 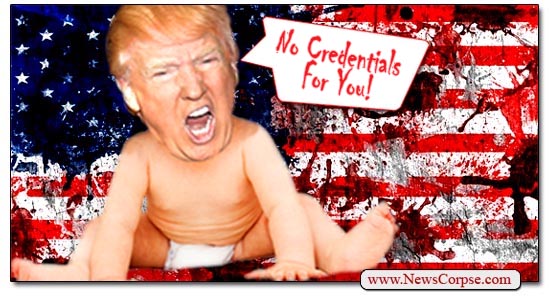 Trump didn’t bother to enumerate any instances of the Post’s alleged dishonesty because he expects his disciples to accept whatever he says as gospel without verification. That’s pretty much the same take he has on matters of policy which he never details because he knows his supporters simply don’t care.

The likely reason for banishing WaPo is related to a Facebook post he made just prior to the credential revocation. He complained about a headline in the Post that correctly reported his implied assertion that “President Obama was involved with Orlando shooting.” Again, Trump didn’t bother to elaborate, but his actual commentary said “Look, we’re led by a man that either is not tough, not smart, or he’s got something else in mind […] There’s something going on. It’s inconceivable.”

The Post was not the only news organization that noticed Trump’s suggestion that the President might be an accomplice to a terrorist act. Every broadcast news network reported the same story with similar headlines:

Add to that group other similar media reports from The Atlantic, Mother Jones, The New Republic, Salon, Esquire, Vice, Chicago Tribune, Politico, Time, Huffington Post, Los Angeles Times, and Reuters, and you have an awfully large chunk of the media who risk losing their press credentials to cover the Trump campaign.

Trump’s campaign has been a hotbed of media discontent for many months. His treatment of the press got so bad at one point that an assembly of media companies got together to discuss what could be done about it. This was after numerous incidents wherein reporters were mistreated by Trump or his staff, including confinement to journalist “pens” and revocation of credentials from reporters the campaign deemed to be unfriendly such as BuzzFeed, the Huffington Post, Fusion, Univision, the Des Moines Register, and the New Hampshire Union Leader. Additionally, Trump threw an anchor for Univision, the largest Spanish-language TV network in the country, out of one of his press conferences. He even briefly boycotted Fox News.

This is behavior that marks Trump as both cowardly and tyrannical. After all, how can he claim to be able to stand up to Putin or ISIS when he’s running scared from WaPo and Mother Jones? His response to coverage that is less than adoring is to revert to the tactics of a wannabe dictator. He even promised that, as president, he would “open up our libel laws” governing the media so that he “can sue them and win lots of money.” As repugnant as that is coming from a political candidate, it would be far more troubling coming from the White House. Trump is demonstrating an overt hostility to the principles of a free press, and if his narcissistic authoritarianism and ignorance weren’t already enough reason to keep conscientious Americans from voting for him, this should seal the deal.