The idea of launching a right-wing television network has been rattling around the Trump camp for months. Last June News Corpse reported that Trump insiders were talking about the possibility of Donald Trump trying to drag his glassy-eyed disciples from the musty arenas and airport hangers where he stages his rallies to the comfort of their own trailer parks. It was a terrible idea then, and it’s still a terrible idea. 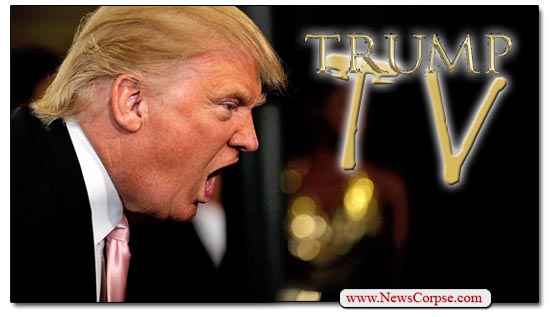 Undeterred, Trump’s son-in-law, Jared Kushner, continues to pursue the venture. According to reports, “Kushner has informally approached one of the media industry’s top dealmakers about the prospect of setting up a Trump television network after the presidential election in November.” Also reported is that “Kushner and the Republican candidate himself are thinking about how to capitalize on the populist movement that has sprung up around their campaign in the event of an election defeat to Democrat Hillary Clinton next month.”

The first notable revelation here is that Trump is spending an inordinate amount of attention on his post-election activities. And they do not involve being president. Perhaps he has recognized what so many of us already know: He’s toast. But even more problematic for him, the TrumpTV project is destined for defeat. There are numerous reasons for that ranging from personal inadequacies to economic realities. Here is a list of the most obvious reasons for a TrumpTV disaster:

Trump has suffered multiple bankruptcies. He has underperformed the markets within which his companies operate. He is currently being sued for fraud. And he couldn’t even manage to make money in the casino business. That’s not exactly a resume that inspires confidence.

He’s fooling himself if he believes that his glowing orange presence is what drove the ratings during this election season. The reason people are watching is the prospect of seeing him speak in tongues, or otherwise breakdown on live TV.

3) The programming would suck

What could his network produce to capitalize on his campaign? Lectures to his emotionally unstable viewers on how awful America is? The Alex Jones Conspiracy Theory Theater Hour? Ivanka and Ted Nugent as a bizarro Donny and Marie? The NRA’s version of CSI? The Walking Dread with David Duke? Perhaps a home shopping angle wherein he tries to sell steaks, time shares, and worthless diplomas.

His hate-filled campaign has re-branded him as the nation’s foremost racist, misogynist, xenophobic, hate monger since Archie Bunker. And while his supporters may seem numerous when you stuff a few thousand into a baseball stadium in Alabama, in order to succeed in TV you need millions of viewers to tune in regularly. Will his fans do that to hear the same stump speech he has been rambling off for the past year?

5) Where will the advertisers come from?

Most companies do not want to be associated with demagogic bigots. Just ask Rush Limbaugh whose advertising revenue has collapsed to the point where it is threatening the continued existence of his radio show.

Someone who has such open disdain for the media is unlikely to be successful as a member of the club. In just the past week he has been condemned by multiple organizations that advocate for a free press. They have called him “an unprecedented threat to the rights of journalists.” His continuous barrage of intimidation and insults have literally put reporters at risk.

7) The cable business is currently a terrible investment

Many people are abandoning cable (cord-cutters) in favor of services like Netflix and Hulu. There is an over-saturation of channels struggling to get attention. Cable systems have no space for new channels. And people with far more adoring fans have had a tough time rolling out new networks. Oprah Winfrey is perfect example of one of America’s most beloved figures whose cable channel is struggling. Glenn Beck and Sarah Palin have also bombed out while trying to launch video ventures.

Trump may try to coax Sean Hannity to leave his perch at Fox News. That could give him a quick, but short, burst of energy. Fox’s disgraced former CEO, Roger Ailes might be persuaded to play a role. However, that could only happen if he found a way to evade the non-competition clause of his separation agreement with Fox. His campaign CEO, Stephen Bannon, would be a possibility to run the operation. Then again, that would only ensure that it appeals to the deplorable demographic that fuels his alt-right website, Breitbart News.

If Trump decides to go ahead with his cable project it will almost certainly be a personal and financial fiasco. It will follow on the heels of his landslide loss for the presidency. On that prospect Trump has expressed his opinion of what it will have meant if he loses the election. He said “if I don’t win, this will be the greatest waste of time, money and energy in my lifetime.” Well, at least until his loopy media mogul ambitions implode.

5 thoughts on “Trump TV Network? Here’s 7 Reasons It Will Be His Next HUGE Failure”