This weekend the film “American Sniper” broke box office records for a January release pulling in more than $100 million. The film has been championed by conservatives as a tribute to Chris Kyle, the former Navy SEAL who was murdered by a fellow veteran suffering from PTSD. 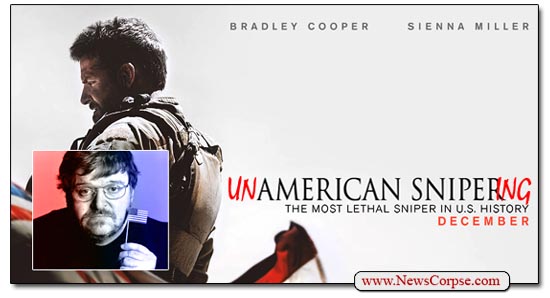 Unfortunately, most of the chatter about the movie is unrelated to its content or quality. The obsessive compulsion by the right is focused on their imagined conspiracy by Hollywood liberals to demean the film and its allegedly pro-war message. The defense was led by Sean Hannity, who devoted an entire hour of his Fox News program to lionizing the film and those connected to it.

Lined up squarely in their sights is a favorite punching bag of the right, Michael Moore. The documentary maker tweeted that “My uncle killed by sniper in WW2. We were taught snipers were cowards.” While he asserts that his comments were misconstrued and that he had much praise for the film, the outrage from the political punditry, who had no more experience in combat than Moore, was swift and brutal. And it quickly escalated to a generalized attack on all of Hollywood.

The only thing conservatives like better than bashing President Obama as a gay, Kenyan-born, Muslim, socialist, is getting bug-eyed about the moral depravity and hopelessly leftist bias of Hollywood. But this example of the right’s anti-Hollywood fetish is particularly absurd. After all, American Sniper was made by Warner Bros., a big Hollywood movie studio. It was directed by Clint Eastwood, a legendary Hollywood icon. The role of Chris Kyle was played by big Hollywood star, Bradley Cooper. The film has received six Oscar nominations (including Best Picture, Best Actor, and Best Adapted Screenplay) from the ultra-Hollywood elitists at the Academy of Motion Picture Arts and Sciences.

What’s more, the film has received abundant praise from Hollywood figures like Rob Lowe, Dean Cain, and even Jane Fonda. Moore himself lauded the film as “awesome” and “superb.” The truth is that American Sniper has enjoyed unparalleled success and support from the very core of the Hollywood establishment that the right is so anxious to hate. But make no mistake, that disdain is purely political and has nothing to do with the movie.

Conservatives go into a knee-jerk attack mode whenever they feel there is an advantage to be gained by slamming Hollywood. They single out those whose opinions conflict with right-wing doctrine and carpet bomb the whole industry for their alleged sins. Never mind that there are many professionals in the biz who are outspoken conservatives (see the Friends of Abe). And the right still holds the distinction of having elected the only Hollywood actor (and union boss) to the presidency, Ronald Reagan.

It’s ironic that the same week that wingnuts are defending Hollywood against allegations of racism for not recognizing the Martin Luther King biopic, Selma, they are condemning Hollywood for perceived slights to American Sniper. Apparently the good folks of Tinsel Town are not the least bit racist, but they are despicably antiwar. And loudmouth liberals like George Clooney are told to shut up, while so-called patriots like Jon Voight are invited to be keynote speakers at Tea Party conventions.

The hypocrisy is waist deep, but rightists are oblivious to it. They are too busy sniping at the objects of their animus to notice the all-to-apparent duplicity that oozes from their robo-raving. And the only thing that matters to them is landing blows against their enemies without concern for tarnishing the reputations of everyone in a business that is dedicated to entertainment, education, and free expression.

The hypersensitive righteous-wing of the Tea Bag brigade is up in arms over the casting of Jane Fonda as Nancy Reagan in an upcoming movie about a butler. The true story of Eugene Allen, who worked in the White House from 1952 to 1986, is being brought to the screen by the Weinstein Company for release this fall. Fonda’s role is not much more than a cameo, and it is in no way political.

Nevertheless, cranky conservatives are whipping up a tempest over the casting because forty years ago Fonda visited North Vietnam, a trip for which she has apologized numerous times. This past week Fox News hosted a veteran with an anti-Fonda Facebook page at least twice (on Megyn Kelly’s America Live and on Fox & Friends), and bloggers from WorldNetDaily to Breitbart have piled on. 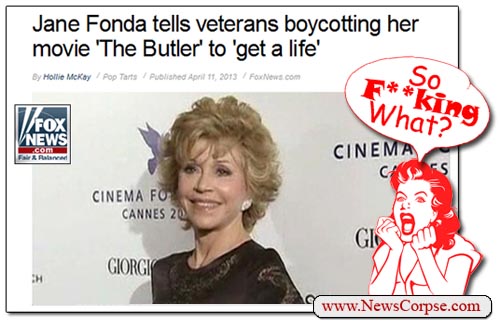 The small-minded grudge-holders fanning these ancient embers are abnormally obsessed with a minor historical event that has no bearing on the present. What’s more, they are only helping the film’s producers to publicize the project and generate more interest and box office.

Fonda’s advice that they “Get a life,” couldn’t be more appropriate. Is their time so pitifully worthless that this is all they can think of to spend it on? Aren’t there some needy children or wounded warriors that they can attend to? They might want to consider that their irrational outrage far exceeds that of Mrs. Reagan, who has given Fonda her blessing:

Fonda: “I was very happy to hear that she was pleased that I was playing her. Which shows how smart she is. She’s smarter than all those extreme right-wingers who are angry that I’m playing a woman whose politics are different than mine. Come on, it’s a movie!”

The casting of Fonda in the Reagan role ought not to stir much controversy from a creative perspective. She is an accomplished actress and bears some resemblance to the former First Lady. Who would these wingnuts prefer for the part, Victoria Jackson? Susan Lucci? Do they believe that every role in cinema must be played by an actor who shares the same political ideology as the subject? Were that the case we would forever be deprived of seeing Tony Danza tackle the role of Jimmy Carter.

And lest you think that the veteran hosting the Facebook page calling for a boycott of “Hanoi Jane” is simply is a concerned citizen with a rational complaint, be aware that he has posted a picture of Fonda with a noose around her neck and described it as his “fantasy.” Apparently lynching women for things they did four decades ago is fair game for these cretins.

I am now firmly convinced that the Fox Nation web site is edited by a high school intern. When you consider the absurdly hyperbolic verbs that animate their headlines (i.e. “Cheney’s Daughter Annihilates MSNBC Anchor”), and their infantile pet names for people they don’t like (i.e. “Pig” Maher), the only conclusion is that either they have recruited from a remedial program at a local high school or Fox has implemented an IQ cap of 95 for all employees (so as not to exceed Fox celebrity Sean Hannity).

Today the Fox Nationalists are featuring a story about a video produced by President Obama’s reelection campaign committee. The video (below) addresses comments made last week by Sarah Palin that accuse the President of wanting to take the country back to the days before the civil war.

Palin: “What Barack Obama seems to want to do is go back to before those days when we were in different classes based on income, based on color of skin.”

As usual, Palin’s comment makes perfect sense if you are suffering from schizophrenic hallucinations while in the midst of an alien abduction. Otherwise, you probably can’t help but laugh at the notion that America’s first black president wants to return to the days when he would have been shackled in chains and traded in slave markets.

The item posted on Fox Nation was accompanied by text that declared with astonishment that, “Four years later, President Obama is still running against Sarah Palin.” What makes this particularly amusing is that a little further down the page, Fox Nation’s juvenile and incompetent editor also posted this item: Hanoi Jane Says Fire Nazi Limbaugh. The article referenced in the title was an editorial Jane Fonda co-wrote with Gloria Steinem and Robin Morgan. The article never called Limbaugh a Nazi, although it did criticize Limbaugh for using such rhetoric against his opponents.

“Limbaugh doesn’t just call people names. He promotes language that deliberately dehumanizes his targets. Like the sophisticated propagandist Josef Goebbels, he creates rhetorical frames — and the bigger the lie, the more effective — inciting listeners to view people they disagree with as sub-humans. His longtime favorite term for women, ‘femi-Nazi,’ doesn’t even raise eyebrows anymore”

So according to the Fox Nationalists there is something profoundly odd about responding to Sarah Palin because she was a candidate for vice-president four whole years ago, but making a big fuss about Jane Fonda’s adventures in Vietnam forty years ago (for which she later expressed genuine regret) is perfectly reasonable. The absurdity of that distinction is obvious. But it should also be noted that Fonda is a celebrity who makes movies and occasionally comments on public affairs, while Palin is currently a Fox News political analyst and still a potential candidate for office (she recently said that she would be open to being drafted as the Republican presidential nominee at the GOP convention).

And yet, the pimply-faced editor of Fox Nation thinks that engaging with Palin is a throwback to a bygone era and one of its most inconsequential and meaningless characters. He seems to regard Palin as a has-been who deserves to be ignored. He may just have a point.