The outrage over Rush Limbaugh’s despicable attack on Georgetown law student, Sandra Fluke, continues to rage unabated. In just a few days he has lost at least 28 major sponsors. That rash of advertiser responsibility led to a fearful Limbaugh issuing a pitifully insincere “apology” that failed to address his serious infraction of civility.

However, rather than deal directly with the specific abhorrent behavior by Limbaugh, much of the right, and particularly Fox News, has decided to try to redirect the debate and shield their corpulent hero from criticism. Fox Nation’s latest contribution to this public relations crisis management campaign is a bankshot from Limbaugh to comedian Bill Maher that also takes a swipe at President Obama.

The Fox Nationalists have really outdone themselves this time with a propaganda piece rich in targets. First of all, what scandal? There is nothing here that even resembles a scandal, which generally refers to some legal wrongdoing. Secondly, Obama has nothing to do with this. The Fox Nationalists are referring to a donation Maher made to an independent SuperPAC that he does not (and legally can not) control. Finally, Fox has managed to whine about offensive comments in an article that makes an offensive comment in the headline. This particular slur is one that Fox has been repeating for years. Almost every time they publish anything about Maher they substitute the word “Pig” for his first name. I don’t think anyone knows why, other than just to be as childishly insulting as possible. 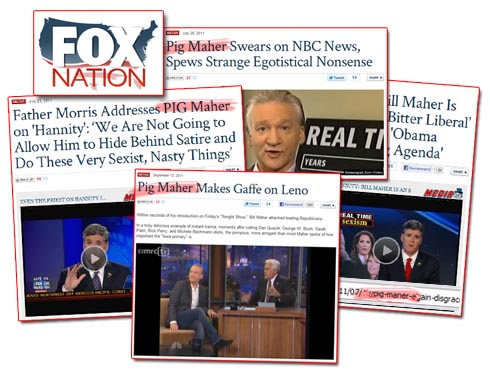 That infantile cheap shot could only be posted on Fox Nation. Could you imagine NBC News or CNN posting such a childish taunt? Fox did the same thing with Sen. Al Franken, repeatedly calling him “Sen. Smalley,” after a character he created a decade ago on Saturday Night Live.

The underlying argument to which Fox is trying to shift is that offensive comments are only objectionable when made by conservatives. This is an empty lament that is being propagated throughout the right-wing media in a coordinated attempt to run interference for Limbaugh. The Fox nationalists ask “why the same outrage doesn’t occur when offensive comments are made by liberals.”

Not only does the same outrage occur, liberals are invariably held to account in material ways. When Keith Olbermann or Ed Schultz or David Shuster made inappropriate comments, MSNBC suspended them from their hosting duties. When was the last time that ever happened to Bill O’Reilly or Sean Hannity or Rush Limbaugh? Liberals have actually been notably conscientious about condemning inappropriate rhetoric, not only in words but in actions. In fact, even the article that Fox cites to make their case that liberals don’t criticize their own was written by Kirsten Powers – a liberal!

Contrary to demanding accountability for misbehavior, rightists seem bent on rewarding it. When Don Imus was bounced from his radio perch for making disparaging, racially charged comments about members of the Rutgers University women’s basketball team, Fox hired him. When Lou Dobbs was released from CNN for his ongoing insults to immigrants, Fox hired him. When Juan Williams lost his NPR gig for admitting that he was afraid of Muslims at airports, Fox hired him.

The management at all of the media companies above are considered to be liberal by conservatives, yet they all took corrective actions against their own employees. Compare that to the right. Limbaugh’s radio syndicator released a statement backing him. Rupert Murdoch publicly stated that he supported Glenn Beck when Beck called the President a racist. The pro-Gingrich SuperPAC, Winning Our Future, just announced that they are buying more time on Limbaugh’s show in the wake of this controversy.

So from both a financial and ideological perspective, the right lines up behind the most vile behavior of their advocates, while the left punishes and even fires those on their side who slip below their ethical standards. Yet the right, and Fox News, are now trying to portray the left as being tolerant of offensive rhetoric. If nothing else, this proves how upside-down the world is in the media realm.

If Fox and other conservatives think that Bill Maher’s donations should be returned, then I suppose they would also demand that the Republican Governor’s Association return Rupert Murdoch’s donation and the U.S. Chamber of Commerce return Glenn Beck’s donation. After that we can go through the rest of the donor files of every public person and make sure that no one who has ever said something that someone thinks is off-color has ever made a contribution to any political person, party, or program. And if people with objectionable histories are prohibited from making political contributions, then the same should go for corporations, right?

Don’t let the media weasels distract from the issue at hand. This campaign to hold Limbaugh accountable is about fundamental values of fairness and decency, and should continue despite his utterly disingenuous attempt at crisis management. Here are some resources you can visit to keep the fight alive: