Despite having the top rated cable news network in the country, and a ridiculously undue influence over much of the rest of the mainstream media, conservatives are still not satisfied with their stranglehold on the press. That’s the only explanation for why they keep launching new right-wing cable news networks to compete with Fox News.

Most of these competing enterprises complain that Fox News has betrayed their cause and defected to the enemy liberal camp. Thus the necessity of forming a new network that is devoted to the true conservative agenda that Fox has abandoned. The disappointment with Fox’s brand of conservatism has stirred a flurry of challengers and even a boycott by some determined Tea Party “Fire Ants.” 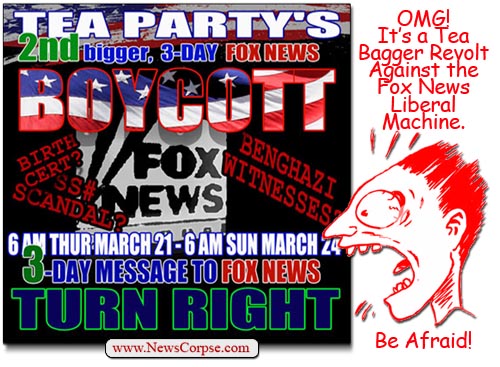 The latest entry in the field is the ultra-rightist webzine, Newsmax. The CEO of Newsmax, Chris Ruddy, has a staunchly conservative resume going back to the days when he opposed the Clintons and accused them of murdering their friend Vince Foster. These days Ruddy claims to be on more friendly terms with his former adversaries and is positioning his NewsmaxTV as a “kinder, gentler Fox News.” But It’s hard to see where NewsmaxTV will succeed in the wake of the other recent attempts to pry wingnuts and Tea Partiers away from Fox.

In 2010, a project from Hollywood conservative (and Friend of Abe) Kelsey Grammer and former Comcast-Spectacor chairman Ed Snider, was given a flashy fanfare as it promised to bring conservative values to both news and entertainment programming. However, the RightNetwork never seemed to get past the website stage and today doesn’t even have that.

That was followed by the much hyped One America News Network in March of 2013. One America was announced at last year’s CPAC with support from Herring Broadcasting and the “Moonie” Washington Times. It’s founder, Charles Herring, said he was motivated by his perception that “the sources of national news tend to lean to the left…and all we have is Fox.” So far, that has not proven to be a sufficient justification for a new right-leaning network.

And now we have NewsmaxTV – a network that admits that much of its success will rely on the same advertising and hucksterism that fuels Newsmax. That business model is heavily reliant on two non-journalism revenue streams: 1) Selling the email lists of conservative pundits, and 2) Selling highly dubious nutritional “supplements” and medical services. Business week described Newsmax as…

“…a smorgasbord of political, health, and financial information, self-help books, and even vitamin supplements constantly pushed through the website and e-mail lists. This eclectic array of products—the company made $46 million in subscription revenue from its 17 newsletters and $6 million from vitamin supplements in 2013—makes Newsmax less of a news business and more of a strange hybrid of the Heritage Foundation and Amway.”

Given the rapidly expanding roster of competitors, Fox News is surely quaking in their Tea Party tri-corner hats and pilgrim boots as a result of this new player in the right-wing media circus. Keepe your eyes peeled because, if NewsmaxTV is anything like the efforts that preceded it, it isn’t going to be there for very long.

Yesterday marked the launch of an avowedly conservative media platform for all the Tea Baggers, Birchers, Oathkeepers, and fans of Glenn Beck, Sarah Palin, Rush Limbaugh, and Ayn Rand. Now you may have thought that there was already such a network in Fox News. You may have noticed that most of the rest of the media is already catering to the right-wing as well. 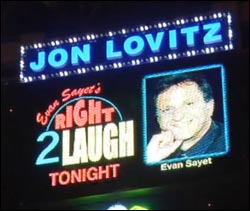 Featured programming on RIGHTNETWORK includes the comedy show Right2Laugh with guest Jon Lovitz. Lovitz is best known for his pathological liar, a character that should feel right at home amongst the conservative set.

Nevertheless, founders of RIGHTNETWORK have determined that there is a burning need for another right-wing network and they are providing one that went live yesterday. The network is financed by a group including Ed Snider, the CEO of Comcast Spectacor, and actor Kelsey Grammer. As it is a private enterprise, the remaining investors have not been disclosed.

The significance of someone like Snider participating in this network is that he will have some influence over the network’s carriage on the nation’s biggest cable system operator, Comcast. Comcast is presently in the process of acquiring NBC which, of course, includes NBC News and MSNBC. What impact that would have on NBC’s content remains to be seen. But it is a legitimate matter of concern with regard to the possibility that Comcast has an interest in shifting its other news outlets farther to the right.

Grammer has been busy promoting the network, including an appearance today on Fox News with Neil Cavuto. I wonder why the right is so accommodating to Grammer when they ordinarily lambaste any celebrity who deigns to venture into politics or social commentary. And Grammer, a well known conservative, is doing far more than offering his opinion, an act that, by itself, would stir an avalanche of disdain were he Sean Penn or Jennifer Aniston.

Whether or not there is an audience for the network is debatable. Fox News previously tried to produced a comedy newscast that was laughed off the air. In a statement from the new network’s president, Kevin McFeeley, the network is seeking to corral the same conservative couch-potatoes as Fox News:

“Investors hope that the support of a conservative audience that has made Fox News Channel and radio hosts such as Rush Limbaugh successful could also work for entertainment programming.”

At least McFeeley acknowledges that Fox News is a right-wing network with a conservative audience. Cavuto didn’t have any problem with that characterization either when he interviewed Grammer. Maybe they are getting closer to abandoning the “fair and balanced” slogan that was never a realistic description of their reporting.