There is uncommon agreement across the political spectrum that Donald Trump’s arbitrary and abhorrent policy of ripping children from the arms of their mothers and fathers is unconscionable and unsustainable. At least outside of Congress, where Republicans continue to support this madness. Even former First Lady Laura Bush has condemned the practice, calling it “cruel,” “immoral,” and “heartbreaking.” 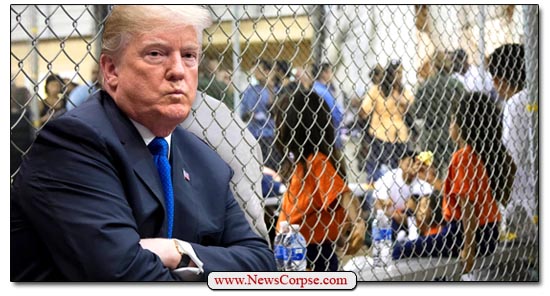 But the Trump administration has been twisting itself into ninth level Mobius strips trying to deny, obfuscate, or otherwise absolve themselves of responsibility for the horror they have wrought. Trump’s Secretary of Homeland Security, Kirstjen Nielsen, had the gall to say flatly that “We do not have a policy of separating families at the border. Period.” And that’s after Trump himself admitted to the policy saying that “We have to break up families. The Democrats gave us that law.” Never mind that it has been well documented that there is no such law and that this is wholly a policy of the Trump administration, and the Democrats had nothing to do with it. It could be reversed by the stroke of a pen by Trump alone. Or even by legislation passed by the Republican controlled Congress. Trump doesn’t need the Democratic votes he keeps whining about.

Trump’s own senior staff admit that this is their doing. “If you don’t want your child separated,” said Attorney General Jeff Sessions, “then don’t bring them across the border illegally.” Of course, these asylum seekers are not breaking any laws. And speaking about family separation, Trump’s Chief of Staff, John Kelly, said “A big name of the game is deterrence [and] it could be a tough deterrent.” In both cases they are advocating cruelty and human rights abuse as a deterrent for a civil border violation.

With the near unanimous revulsion for Trump’s policy, it is inevitable that it will be rescinded. It may come from Congress or the White House, but it seems unthinkable that it would be permitted to continue, even by Republicans who, so far, have shown zero compassion. And with a rescission there will also likely be an attempt on Trump’s part to take credit for it. That’s what he does. He is genetically incapable of taking responsibility for any of his failures, but he is psychotically obsessed with taking credit for everyone else’s achievements (ask Obama).

While it’s important to point out that this mess is all Trump’s doing, and that he is lying when he blames Democrats for his own heinous policy, it will be equally important to make sure that he doesn’t exalt himself as the savior of the children once he is forced to reverse his policy. What he’s doing is a moral atrocity. It will have been a moral atrocity after it’s stopped. Some of the damage to these kids will be permanent, and the perpetrators deserve permanent scorn for what they’ve done. We must never forget or forgive this sort of noxious government activity. #BlameTrump

5 thoughts on “Be Aware: After Trump is Forced to Reverse His Child Abuse Policy, He’ll Take All the Credit”