It has only been about two and a half years since Donald Trump was inaugurated as president. Yes, it seems like at least a decade, but that’s only because it’s been filled with so much pain, disgust, and shock. And with just over half of a single term elapsed, Trump is already fantasizing about how history will treat him when he’s gone. Which is precisely what you’d expect of a self-absorbed, and dangerously psychotic, narcissist. 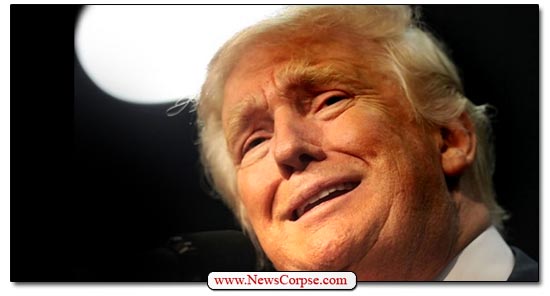 Trump posted a tweet wherein he referred to a future historical period that he deemed the “Age of Trump.” That’s mighty audacious of him considering that ages, in geological terms, often extend for periods of time that far exceed even a two-term presidency. For example, the Age of the Dinosaurs or the Industrial Age. What’s more, his term as president is unlikely to define even that limited period of time in anything but books about the decline of Western civilization. Here is what he tweeted:

There has never been a time in the history of our Country that the Media was so Fraudulent, Fake, or Corrupt! When the “Age of Trump” is looked back on many years from now, I only hope that a big part of my legacy will be the exposing of massive dishonesty in the Fake News!

Trump’s maniacal assertion that we are currently living in a time of unprecedented fraud and corruption in the media is purely a fabrication of his own diseased brain. To be sure, there are isolated tumors in the body of the press that are malignant and growing. The pus oozing from Fox News is evidence of that. But that isn’t what Trump is referring to (although he recently took a swipe at his State TV network, even ordering his cult followers to “start looking for a new news outlet”). What Trump regards as fraudulent is any news that isn’t wholly adoring and worshipful. And it is from that perspective that he imagines his legacy as being one of exposing “massive dishonesty in the Fake News.”

There are only two significant problems with Trump’s dream of his own epoch. First of all, he has never exposed a single example of dishonesty in the media. All he does is whine about negative, but truthful, stories that trigger his anger and vengeance. He doesn’t provide any proof that any of these stories are false. He just screech-tweets his displeasure at being held to account for his ignorance, incompetence, and dishonesty.

The second problem with Trump’s hoped for future adulation as a news-buster is that there are so many other more important developments that overshadow his imaginary media exposés. If he is going to be remembered for anything it’s more likely be as the president who had caged babies, or lied about building a wall that Mexico would pay for, or banned Muslims from entering the country, or failed to either repeal or replace Obamacare, or embraced neo-Nazis and white nationalists, or doubled the national debt on the backs of middle-class Americans, or packed the Supreme Court with disreputable heathens, or openly expressed overtly racist views, or endeavored to hasten the destruction of the Earth by rolling back environmental regulations and dismissing Climate Change as a hoax.

And if those frightful hallmarks of the “Age of Trump” don’t dominate his historical remembrances, maybe it will be his more comically embarrassing ventures as the president who tried to buy Greenland, or nuke hurricanes, or fear monger about windmill cancer, or become the Commander-in-Chief of the Space Force. Then again, he could be recalled for the coming Trump Recession, or his impeachment for conspiring with Russia and obstructing justice, or his arrest after being thrown out of the White House.

Either way, these are the sort of things that Trump will be remembered, despised, and/or ridiculed for. It won’t have anything to do with his fictitious allegations about the press. And in the end, the best part of recalling the post-Trumpian age will be that he’s gone. Hopefully before too many of us are.