Most objective people recognize that the language used by national leaders can profoundly influence their followers. That’s especially true of cult-like movements wherein the leader is regarded as infallible and claims to be an omnipotent figure who know more than anyone about everything and is the only one who can fix every problem. Sound familiar? 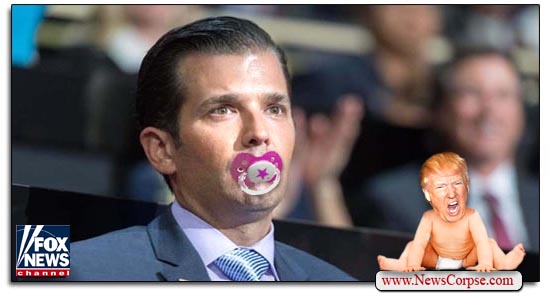 Nevertheless, Donald Trump’s apologists have been frantically trying to absolve him of any responsibility for the hostilities that erupt from his careless rhetoric and hate speech. His Republican colleagues, and the fluffers on Fox News, refuse to concede that ranting endlessly about immigrants and refugees as rapists and invaders will have any impact on Trump’s glassy-eyed disciples. That’s true even after the El Paso massacre where the shooter left writings that were indistinguishable from Trump’s public tirades.

Among the diversions used by Trump’s defenders is that the gunman in Dayton, Ohio, might have had some more liberal leanings. Even if that’s true, it’s a bizarre effort to draw a false equivalency between the two events. Unlike the El Paso situation, the Dayton shooter never even hinted that he was motivated by any political person or ideology.

This is where Donald Trump Jr comes in. He appeared on his father’s favorite Fox News program, Fox and Friends (video below), to commiserate with the “Curvy Couch” potatoes about how the President is the real victim in all of this. The TV bitch session repeatedly portrayed Trump as a good-hearted, well-meaning uniter who only wants everybody to get along. But at the same time Junior went out of his way to malign Daddy’s critics. He focused particularly on Rep. Joaquin Castro, chairman of Congressional Hispanic Caucus and the brother of Julian, who is running for the Democratic nomination for president. Castro had posted a graphic on Twitter that listed some of the San Antonio area’s donors to Trump’s campaign. So Junior lashed out in huff saying…

“That list sort of screams like the Dayton, Ohio, shooter’s list. When a radical, left-wing politician, who’s polling at about zero percent, does this for either attention or a call to action, it’s pretty scary. I mean, that was the same thing that the Dayton, Ohio shooter did.”

The same thing? Not quite. The President uses abhorrent language that was intended to make weak Americans fear migrants as potential assailants who are out for blood. He characterizes them as subhumans assembling to either take over America or destroy it. The only thing Castro’s tweet did was identify people who support Trump. Apparently they aren’t especially proud of that decision. To the contrary, Junior and the Fox hosts agree that merely being associated with Trump’s reelection effort is so reprehensible that it makes them potential targets for murder. That says more about what they think of themselves than anything else.

Think about that. People in Texas – IN TEXAS – are worried that being a supporter of Trump will cause them harm. There don’t appear to be any Biden (or Sanders, or Warren, or Harris or…) supporters that have that fear. And to be fair, neither do most of Trump’s supporters. This expression of fear by Junior and Fox is an utterly dishonest charade intended to disparage Castro and some nebulous conspiracy of allegedly hostile lefties. But when Junior was asked whether the list of Trump donors might really cause someone to hurt any of them, he conceded that it wouldn’t, except under certain circumstances:

Wow! This is exactly what people have been saying makes Trump’s racist harangues so dangerous. The possibility that some of his Deplorables would act out violently, believing that they were fulfilling his wishes. And Junior is now admitting that unstable people could take the words of his father as an inspiration to commit unlawful and violent acts. It’s precisely the charge that has been leveled at Trump. And it’s the same charge that Junior, Fox News, and the rest of Wingnutia, have been been so fiercely denying. Now, despite the fact that it doesn’t fit their narrative, it is being forthrightly validated.

Junior went on to whine (just like Daddy) about the tribulations of politics. “Our people,” he said, “don’t weaponize the political system the same way. We don’t do the organized boycotts that the left does.” He obviously isn’t paying much attention to his father who has called for numerous boycotts. But then there isn’t really much reason to listen to Trump when he lies so frequently and brazenly, In fact, just this morning, when asked by reporters if he regrets any of the harsh and divisive rhetoric he uses, he said that “No, I think my rhetoric brings people together.” Umm…nevermind. There is simply no satisfactory response to that degree of delusion.