For much of the post-presidency of Donald Trump, some analysts having observed his increasingly bizarre conduct and statements, have suggested that he might be laying the groundwork for an insanity defense should any of the investigations in progress lead to indictments. That’s always seemed to be a fanciful notion, but an improbable one. Until now. 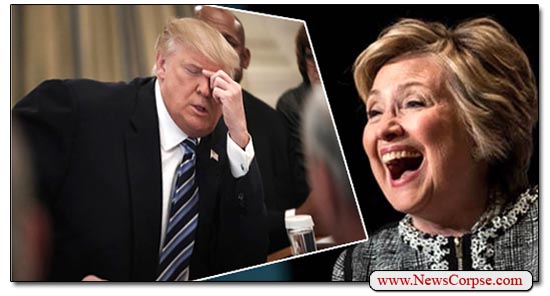 On Thursday morning Trump called into the radio show of wingnut Wendy Bell to pontificate on the recent search of his Mar-a-Lago bunker by the FBI. For the three weeks since, Trump has floated an array of progressively ludicrous explanations and excuses for what occurred and why. Including that the FBI staged a photo of the classified documents that he hoarded in manner that made him look like slob.

RELATED: Poor Crybaby Trump is ‘Confused’ About the Photo of the Classified Documents He Stole

A brief summary of Trump’s accusations would include that the documents that don’t exist, and which Trump refused to return when subpoenaed, were actually there, but he was using them, even though someone else packed them without his knowledge, which didn’t happen because the FBI planted them, and the documents that the FBI planted were all declassified in a secret ceremony, and protected by attorney-client privilege. No, really!

On Bell’s radio show Trump offered up a brand new reason for the FBI search. Although it’s a reason that draws on one of Trump favorite crackpot conspiracy theories from the old days. In a rambling and disjointed proclamation, Trump revealed that…

“I think they were looking for Hillary Clinton emails. I think they thought… and who knows? Boxes full of stuff… I think they thought that Hillary Clinton…it had something to do with the Russia, Russia, Russia… They were afraid that things were in there, part of their scam material, because that’s what they are, the scammers. And they would think that things were in there having to do with… Can you imagine…?”

In a new interview, Trump says he believes DOJ was really looking for Russiagate material and Hillary Clinton emails during the search. pic.twitter.com/PtLBIQKjwp

Excuse me? Are we really reviving the Hillary Clinton email nonsense to explain the motives for the FBI’s efforts to recover highly sensitive national security materials that Trump stole and hoarded as his Palm Beach resort/home? Is Trump confessing that he took documents related to Clinton when he left the White House? Or is he asserting that the FBI is on his side in the quest find incriminating dirt on Clinton so that he can “Lock her up”? And where does Russia figure into his lunacy?

Perhaps a more complex, though equally as preposterous, theory is that Trump is implying that he took alleged evidence against Clinton for safekeeping, so that he could press charges against her when he resumes his post as American Dictator. And the FBI was trying to get it back so they could destroy it. Leaving the door open for Muslim King Obama to return to power.

That’s precisely the sort of devious and nefarious plot that would fester in Trump’s diseased brain. Is it crazy? Sure! Crazy like a Fox News segment.

Speaking of which, Fox’s Trump-fluffers are still struggling mightily to absolve him of any guilt for having the classified documents that he says aren’t classified anymore. Except that Fox’s Jeanine Pirro just conceded that they are classified. “I was shocked,” said Pirro, “to see classified documents and photos on a floor released by the FBI.” And Alan Dershowitz said the same thing on Newsmax. “This is classified material,” Dershowitz insisted, “and they’re putting it out and giving it to our enemies because they want to, because they can.”

Of course the content in the documents was covered up so that our enemies couldn’t possibly see any of it. But it’s interesting that these Trumpers are more concerned about how the evidence was displayed while in the FBI’s custody, than that there is such incriminating evidence of Trump’s treasonous malfeasance by storing these documents so insecurely at his hotel.

All of this reflects just how desperate and devoid of rational excuses they are for Trump’s obvious guilt. And as the walls close in around him, we can expect the madness to grow exponentially. Hillary better watch out. Trump still has not hit bottom. Can you imagine?