CNN has not exactly been dignifying itself lately. It’s new management appears to be shifting its editorial direction more to either an artificial neutrality or downright conservativism. They have fired honest journalists like Brian Stelter and John Harwood. And sources say they are pushing remaining personnel to be more “Republican-friendly.” 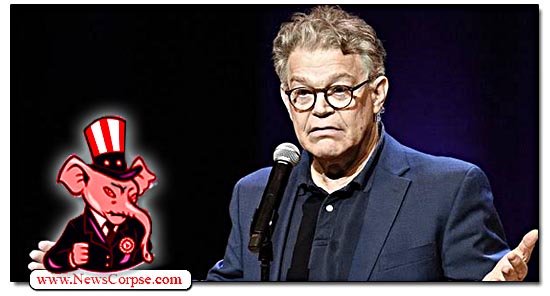 However, on Saturday one of the remaining bright lights at the network, Jim Acosta, invited Al Franken on to debate GOP strategist April Stewart about the legitimacy of the Supreme Court. To put it mildly, it didn’t go well for Stewart.

The discussion began with Acosta playing a video of Vice-President Kamala Harris lamenting that the current Supreme Court is “an activist Court” as exemplified by its decision overturning Roe v Wade. Acosta then turned to Franken, who pointed out that if the Court’s reputation was suffering, it was because of Republicans disrespect for the institution. Franken cited as examples how they refused to take up the nomination of Merrick Garland due to the proximity of a presidential election, which was a year away, but then confirmed Amy Coney Barrett within a few weeks of an election.

Franken began by stating flatly and factually the circumstances that led to the confirmations of Justices Gorsuch and Barrett as having been “stolen.” What followed was an exchange that exposed the utter vacancy of the GOP’s position. Stewart attempted to revise history with a false argument about why Garland was snubbed. But Franken wasn’t having it (video below)…

Franken: They’ve stolen two seats: the one that Merrick Garland wasn’t given a hearing for, and the one that Coney Barrett, where she was seated a week before the election. That destroyed the legitimacy of the court.
Stewart: To throw some accuracy in what Al said there, Merrick Garland was held up because we had divided government, a Democrat in the White House, and Republicans in control…
Franken: That’s not what McConnell said.
Stewart: But that’s the way historically this has been. When you’re in close to an election year and you have divided government….
Franken: No, that’s not the way it’s been historically done.
Stewart: When you have divided government, there typically is inclination to…
Franken: Tell me when this happened before. Tell me when it happened before.

Stewart ignored Franken’s question and tried repeatedly to push a narrative that had no resemblance to reality. And each time she did, Franken interrupted to ask her again to simply “tell me when it happened before.” She never could. And finally, Franken explained to her why she couldn’t cite another example…

Stewart: I can’t give you an exact example when this happened in the past.
Franken: You know why you can’t? Because it hasn’t happened before.

Stewart’s humiliating stammering as she sought to spread a wholly fictional account of the Republicans’ deliberate poisoning of the Supreme Court’s credibility is emblematic of how little regard the GOP has for the Court and the Constitution. But Franken’s dogged defense of historical honesty is a master class in how to handle right-wing propagandists. Hopefully we will see more of that as the midterm election advances – and beyond.

SEE ALSO: Jon Stewart Nails It: The Supreme Court is Now the Fox News of Justice