What can you say about Keith Ablow, the Fox News ‘psycho’ analyst who recently charged that President Obama was waging psychological warfare on the American people? You may recall “doctor” Ablow as the lunatic who actually praised Newt Gingrich for being unfaithful to multiple wives; who welcomed the pain of Americans suffering through the recession; who repeatedly diagnosed President Obama and others without ever having met them. No wonder he was booted from the American Psychiatric Association.

Well, despite all the odds, Ablow has managed to surpass his own Olympian record for demented commentary by writing an op-ed for Fox News paying tribute to the philosophy of convicted murderer and terrorist, Ted Kazcynski, aka the Unabomber. 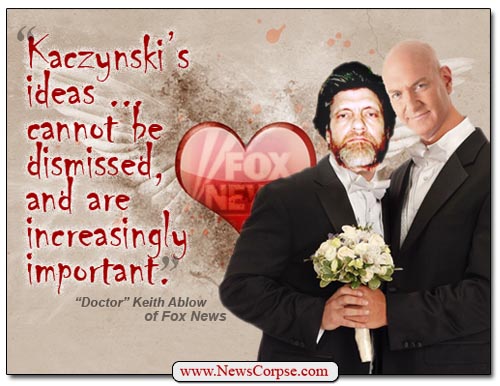 After making an obligatory condemnation of Kaczynski’s crimes, Ablow proceeds to express his admiration for the ideas laid out in the “manifesto” that the serial killer demanded be published in exchange for his promise to stop blowing people up.

Ablow: “Kaczynski’s ideas, however, described in a manifesto entitled, “Industrial Society and Its Future,” cannot be dismissed, and are increasingly important as our society hurtles toward individual disempowerment at the hands of technology and political forces that erode autonomy.”

Ablow then describes Kaczynski’s work as a treatise in opposition to “the industrialization of America and the world, and our increasing reliance on technology,” which he and Kaczynski believe is “short-circuiting the ability of human beings to think for themselves.” There is kernel of truth in this concept. However, there are also dozens of other, more reputable proponents whom Ablow could cite if he were interested in advancing these theories.

However, Ablow quickly reveals that he isn’t interested in this as a discussion on societal progress. Like everything else he touches, this is just another opportunity for Ablow to disparage the President and hurl screwy psychological insults at his perceived enemies. Ablow is nothing if not consistently obsessed with liberal bashing. His article continues with an overt swipe at “the left” that he borrows from Kaczynski.

Ablow: “He [Kaczynski] saw the political “left” as embracing these technologies with special fervor, because they were in keeping with the “leftist” ideology that centralized power was the way to govern men.

“He saw these “leftists” as psychologically disordered—seeking to compensate for deep feelings of personal disempowerment by banding together and seeking extraordinary means of control in society.”

For those of you who have wondered what the Unabomber thought about liberal politics, it’s true that Kaczynski had some harsh criticisms of leftists in his manifesto. But there are three problems with Ablow referring to them in order to make his point.

First of all, whether or not you have some philosophical agreements with someone like Kaczynski, it is utterly insane to cite him as a corroborating source. It’s like trying to persuade a friend to become a vegetarian because Hitler was one. You might have better results if you use Einstein as an example.

Secondly, even if you were foolish enough to try to associate yourself with Kaczynski’s aversion to liberals, you would have to dishonestly and deliberately hide the fact that he also despised conservatives. Which is exactly what Ablow did. Here is what Kaczynski wrote about the right:

Kaczynski: “The conservatives are fools: They whine about the decay of traditional values, yet they enthusiastically support technological progress and economic growth. Apparently it never occurs to them that you can’t make rapid, drastic changes in the technology and the economy of a society without causing rapid changes in all other aspects of the society as well, and that such rapid changes inevitably break down traditional values.”

Even worse, Kaczynski assailed one of the most cherished sacred cows of the right when he wrote this…

Kaczynski: “Conservatives’ efforts to decrease the amount of government regulation are of little benefit to the average man. For one thing, only a fraction of the regulations can be eliminated because most regulations are necessary. For another thing, most of the deregulation affects business rather than the average individual, so that its main effect is to take power from the government and give it to private corporations. What this means for the average man is that government interference in his life is replaced by interference from big corporations, which may be permitted, for example, to dump more chemicals that get into his water supply and give him cancer. The conservatives are just taking the average man for a sucker, exploiting his resentment of Big Government to promote the power of Big Business.”

I couldn’t have said it better myself. Nevertheless, I would never promote the fact that Kaczynski said something with which I agree. Not when more ethical folks like Robert Reich, or Howard Zinn, or Bernie Sanders, or a thousand other people’s advocates, have also said these things and don’t happen to be deranged killers. Which brings us to third reason not to recruit Kaczynski as an ideological ally: HE’S NUTS!

Still, Ablow expands on his tribute to Kaczynski with the assertion that the emergence of social media (Facebook, Twitter, etc.) must have caused Kaczynski to have “even more certainty, that he was onto something,” and to “marvel at the ease with which technology taps the ego and drains the soul.” Ablow further speculated favorably that Kaczynski must have wondered whether “the widespread use of GPS…erodes your real sense of direction — on highways and, perhaps, in life.” Seriously. Ablow actually believes that using GPS can erode your direction in life. That would explain why so many people looking for the nearest Starbucks ended up with their noses in copies of Atlas Shrugged.

Now, if you think that Ablow has reached a pinnacle of dementia, you don’t know Keith Ablow. He segues from his comically delusional analysis of new media to his favorite target, President Obama. Ablow sets about to connecting non-existent dots to draw a picture of the President as a master manipulator who is putting “the core of human life” “under seige.” Ablow’s evidence of this is that Obama won election to the presidency “in part, by mastering the use of the Internet as a campaign tool.”

See what he did there? According to Ablow/Kaczynski, technology is an evil usurper of individual autonomy that will destroy traditional values and make us all slaves to Big Government and/or Big Business. And Obama is the master of technology. Could it be any clearer? Obama must be the Techno-Anti-Christ – a demon so rare and powerful that only Ablow is aware of its existence. And aren’t we lucky that he is here to warn us?

So essentially, Ablow, who once declared that Obama “has it in for America,” constructed this whole article as a vehicle to cast the President as a monstrous aberration bent on America’s ruin. The surprising thing is that he enlists the help of a domestic terrorist to make his case. And to insure that no one misses the point, he closes his column with a profoundly flattering review of Kaczynski’s opus saying that…

Ablow: “It is time for people to read “Industrial Society and its Future,” by convicted serial killer Ted Kaczynski. His work, despite his deeds, deserves a place alongside “Brave New World,” by Aldous Huxley, and “1984,” by George Orwell.”

There are some notable differences between Kaczynski’s rambling, psychotic screed, and the inspiring fiction of Huxley and Orwell. At the risk of belaboring the obvious, the latter two were gifted novelists who never murdered anyone. And the former is a criminally insane sociopath who has found common ground with a member of the Fox News Medical “A” Team. God help anyone who takes advice from this maniac. And if I were you, I wouldn’t open any packages with Ablow’s name on the return address.