Over the next few days (weeks?) There will be plenty of opinions expressed on the outcome of the George Zimmerman trial. Some of them will come from knowledgeable legal analysts and, unfortunately, way too many from partisan political hacks.

The latter were among the first to weigh in with ignorant and incendiary blowhards like Rush Limbaugh predicting, and even yearning for, civil unrest. And then there was wingnut Tea-publican Steve King who blamed Obama for Zimmerman being tried in the first place. But Fox News, and their corrupt cousins at Fox Nation (see Fox Nation vs. Reality for a detailed examination of their corruption), were not about to be left out of the media Wretch-a-Thon as they elevated a couple of stray episodes of minor vandalism to the front page, leaving the dishonest impression that America was aflame with rioting. 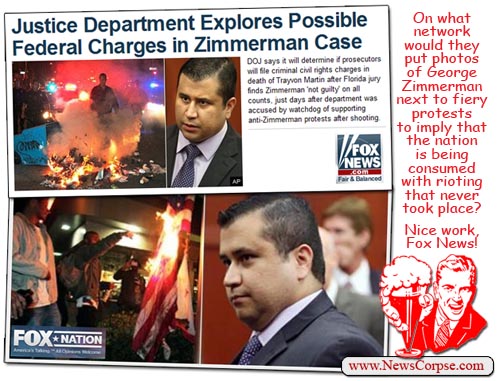 In addition to falsely fear mongering over non-existent riots, Fox managed to insert into their article an already debunked allegation that the Department of Justice was of staging anti-Zimmerman rallies. They also dredged up phony assertions that Obama had politicized the trial last year when he merely expressed empathy for the grieving parents.

However, the best demonstration of the difference between responsible leadership and reckless provocation can be observed in the responses to the verdict by President Obama and the dour visages of Fox News.

The President gave us a call for “calm reflection” and a challenge to seek solutions for ourselves and our country. And then there was this:

Tucker Carlson, Fox News: I’m positive that people like Jessie Jackson and Al Sharpton do not deserve to be called civil rights leaders. They are not. They are hustlers and pimps who make a living off inflaming racial tensions. They know nothing about this. They’re not residents of Florida. They don’t represent anybody. They’re not elected to anything. They don’t have constituencies. And the only reason they are allowed to do this is because we in the press enable them by calling them civil rights leaders. Why do we do that?

So Carlson’s morning after aphorism begins with racist epithets hurled at African-American leaders who Carlson, a white scion of wealth and privilege, doesn’t think should be leaders – as if he gets to choose. His tirade then spits out a series of criteria that he thinks ought to disqualify people from having an opinion. But, oddly enough, they all apply to him. He doesn’t know anything about this. He is not a resident of Florida. He doesn’t represent anybody. He wasn’t elected to anything. He has no constituency. And the only reason he is allowed to do this is because the press enables him. Why do they do that?

Sharpton and Jackson have actually earned the respect of the communities they serve. You may have differences with them, but they have been in the trenches for decades and the people who have chosen to stand with them have every right to do so. You do not need to be elected to have a role as an activist. Nor do you need some specific residency. Martin Luther King, Jr. was not elected and he took his campaign for equality across an entire nation.

Carlson, on the other hand, has no right whatsoever to pick and choose leaders for the African-American community or the civil rights movement. He has been more of an impediment to equality throughout his career than an advocate. And with these comments from his new perch on Fox News, he proves that he is only interested in creating hostility and division, which is probably why he got the job at Fox where racial division is a key component of their editorial agenda.

The obvious differences between the messages of Obama and Carlson are proof of which side holds the moral high ground. Carlson’s rant illustrates the ethical vacancy of Fox News and its conservative minions whose preference for prejudice and hate is all too apparent. While Obama’s words offer constructive inspiration aimed at bridging social divides. What this country needs is more of Obama’s bridge building, and much, much less of Fox’s bridge burning. Particularly the sort of burning in their news photos that are obviously meant to provoke fear and aggravate tensions.