One of the propaganda tactics most favored by Fox News is the snipping of a comment by President Obama and regurgitating it in a negative, and wholly dishonest, light. They did it last year on behalf of the Romney campaign numerous times with silliness like “You didn’t build that,” and other blatant misrepresentations. 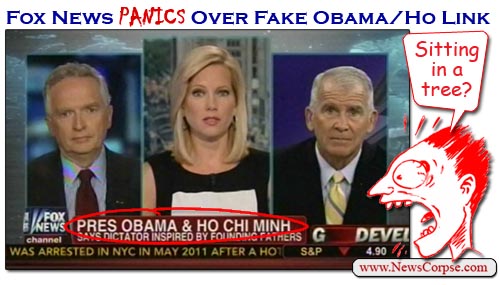 For more Fox-aganda bias, get the acclaimed ebook:
Fox Nation vs. Reality: The Fox News Community’s Assault on Truth

Today Fox News is premiering their latest rhetorical deception by fixating on remarks the President made in a press availability with Vietnam President Truong Tan Sang. While describing the discussion Obama had with Sang, he noted that…

“At the conclusion of the meeting, President Sang shared with me a copy of a letter sent by Ho Chi Minh to Harry Truman. And we discussed the fact that Ho Chi Minh was actually inspired by the U.S. Declaration of Independence and Constitution, and the words of Thomas Jefferson.”

That’s it. Nothing praising Ho Chi Minh at all. Just a simple recitation of unarguable facts. No one on Fox or the right-wing fruitcake brigade disputes that Ho Chi Minh revered the people and ideas that inspired the birth of the United States. He used the Declaration of Independence as the model for Vietnam’s quest for its own independence from France.

Nevertheless, Fox News is now attempting to twist Obama’s words into something that he never said or even implied. And the “fair and balanced” network brought on two revolting characters with sordid pasts to advance the distortions. Oliver North is the convicted Reaganite who illegally sold arms to Iran in order to secure funding to support fascist rebels in Nicaragua, which was prohibited by congress. Ralph Peters is the Fox strategic analyst who called on the Taliban to “save us a lot of legal hassles” by executing an American soldier. He also advocated military attacks on the media. These two traitorous miscreants spent several unopposed minutes on Fox lambasting Obama as “stupid” and “evil” as they lied about what he said.

Anyone who seriously regards Fox as a credible news source should seek professional help. The unadulterated lie that Obama praised Ho Chi Minh can also be juxtaposed with the documented fact that Fox did indeed praise the Unabomber. This is the level of cognitive disconnect that exists at Fox, and it is the reason that their audience is so pathetically ignorant. It’s a good thing that their viewers are so small in number (less than 1% of the population) and so close to their judgment day (the oldest skewing audience in television).