The Fox News interview of Reza Aslan, author of Zealot, was one of the most pathetic displays of journalistic bias and incompetence in recent memory. The interviewer, Lauren Green, has been roundly and deservedly criticized for her amateurish attempt to ambush her guest and foment a fake controversy. The response from media professionals has been been nearly unanimous that Fox botched the affair.

However, Fox, true to form, stiffens their back and refuses to accept responsibility for an embarrassing episode and slink away with some sense of humility. They have characteristically fought back with ferocious intensity, defending their anchor and slandering their guest. Numerous articles have already appeared on FoxNews.com, but the full-on blitzkrieg took place on the air with anchor Shannon Bream fluffing the head of the uber-rightist Media Research Center, Brent Bozell.

Bozell led off his sycophantic exculpation by declaring that “I’ll be the first one to applaud Lauren Green for the question that she asked.” Bozell insisted that it was entirely appropriate to impugn Aslan repeatedly while ignoring any actual discussion of his book. He further asserted that Aslan should have confessed to having a bias, saying that…

“If he is going to take the attitude that he is just a scholar, he just happens to be Muslim, that he really doesn’t care about this issue so much, he’s not a very good Muslim.”

Bozell, a devout Catholic, may not be the best person to make that judgment. But more to the point, Aslan is indeed taking the attitude that he is a scholar who happens to be Muslim. Therefore, according to Bozell, he is not biased. Bozell actually seems to be complaining that Aslan isn’t more deferential to his faith, in which case he would be a “good” Muslim and biased. But Aslan isn’t cooperating with Bozell’s conspiracy theory.

As for anchor Shannon Bream, she could not have been more complicit with Bozell’s determined smear tactics. She opened her report saying…

“It started out with very far-left media questioning Lauren, criticizing her, saying she shouldn’t have asked the question, or that it was any of her business what his prerogative may have been on writing the book. It then trickled out into more and more mainstream media and it’s taken on a life of its own – the discussion about Lauren versus the book or the author.”

In point of fact, not a single critic ever suggested that Green should not have asked Aslan about his faith or his motivation. The criticism was that she never stopped asking about it. She obsessed over it despite his having answered her several times. Then Bream has the gall to complain that the story in the media was more focused on Green than on the book. That’s exactly what Aslan complained about throughout Green’s ridiculous interview.

The blockheaded incoherence exhibited by Green, Bream, and Bozell, was illustrated perfectly by the graphic that Fox displayed during Bozell’s segment. It read, “Liberal media attacks Fox reporter.” 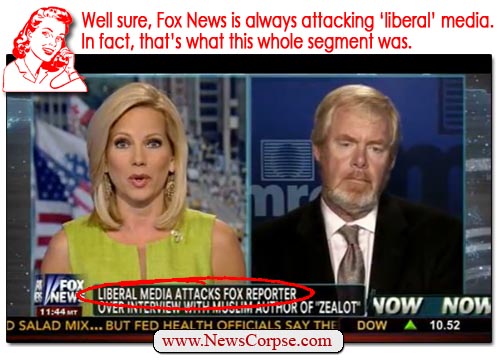 In case you’ve been stationed on a lunar base for the past several years, Fox whining about attacks from the liberal media is evidence that their cerebral cortexes have atrophied. Fox has been on a non-stop campaign of attacking every other media outlet as dishonest, dangerous, even treasonous, since the day they launched. Fox’s slogan, “fair and balanced,” is itself an assault on the integrity of their competitors. For a sampling of how Fox deals with their media peers…..

This list could go on and on. And it doesn’t even include the personal attacks leveled by Bill O’Reilly, Sean Hannity, Eric Bolling, the Fox & Friends crew, etc. Fox spends more time on attacking the rest of the media than they do on reporting the news. But to be fair, they hardly ever report actual news, so that isn’t a particularly revealing criticism.