On Fox News this morning there was a segment debating the media coverage of the “Crisis in Syria” (video below). On any other network this would have been a legitimate subject for debate and a fascinating topic. But leave it to Fox News to broadcast a version of history that makes Snow White’s adventures with seven diminutive forest dwellers look like a PBS documentary.

Fox’s Martha MacCallum opened the segment with a declarative motion for which she provided no factual basis: “Critics are suggesting that the media is not nearly as hard on President Obama about the potential of going into Syria, as they were on President Bush and his war that he fought in Iraq.” The reliance on a ghostly assemblage of unnamed critics is a variant of the “some say” tactic of inventing a premise with which a lazy commentator can project a dishonest argument. But it was just the lead-in that conservative guest Monica Crowley required to say this:

“Most of the media were very skeptical about any kind of military intervention in Iraq. They raised a lot of very legitimate questions. They also pounded President Bush and his team relentlessly in the run-up, during the war and of course even still to this day over that war. […] It was just the fact that it was President Bush prosecuting this war. When you look at the difference between that coverage and the coverage of President Obama…in this run-up to a possible action in Syria, it’s like night and day.” 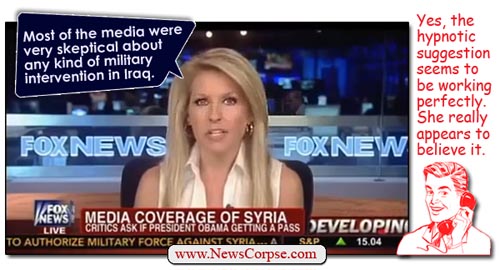 Indeed, it is like night and day. But not in any way meant by Crowley. Prior to the Iraq war, the media was in virtual unanimity with respect to supporting Bush and his fraudulent escapade. Even the factions of the media that are most often regard as liberal enclaves were banging the drums of war.

Recall that it was the New York Times that employed Judith Miller (now with Fox News) who was instrumental in providing cover for the Bush administration’s pro-war agenda. She was a trusty vessel for the dissemination of propaganda from Bush’s war hawks. She was the reporter most responsible for validating false intelligence on Saddam Hussein’s weapons capabilities and ambitions.

If you watched MSNBC at the time, you might recall that the top rated program was hosted by talk show legend Phil Donahue. He was a prominent skeptic of the looming U.S. invasion of Iraq. Consequently, the management of MSNBC viewed him as a “difficult public face for NBC in a time of war.” His show was canceled in February of 2003, shortly before the invasion.

The media presentation of dissent was nearly non-existent. Despite the fact that millions of Americans took to the streets to protest the war, the media declined to cover the demonstrations. Contrast that with the way they slobbered over a few malcontents in a tiny and unpopular political sect known as the Tea Party, and a handful of their hollering rubes at town hall meetings ranting about their opposition to health care.

The characterization of the media as going soft on Obama with regard to Syria is also delusional in the extreme. As expected, Fox News has been harshly critical of Obama no matter what he does. Last week they hammered him for taking a unilateral stance and failing to consult Congress on a possible reprisal for Syria’s chemical weapons deployment. This week they are bashing him for wasting time with congressional consultations and weakening the presidency by seeking them. What’s more, Obama has come in for criticism by pundits on the left like Rachel Maddow and Thom Hartmann and even Jon Stewart.

The right-wing directive to refrain from criticizing a president during international hostilities is apparently only in effect when a Republican is in the White House. Critics of Bush were often called traitors when they expressed their opposition to his policies. But outraged Tea-publicans are now encouraged to disparage the Commander-in-Chief in the most vile terms. Today it is the President who is called a traitor by right-wing protesters who fancy themselves as patriots.

In light of these facts, it is incomprehensible how Crowley can take to the Fox News channel and offer a twisted version of history wherein Obama is getting a pass and Bush suffered outrageous slings and arrows. And what is even more disturbing is that so many Fox News viewers are too dimwitted to separate the Fox fallacy from reality.

7 thoughts on “Fox News Dementia: Media Is Not As Hard On Obama/Syria As They Were On Bush/Iraq”