You have to give Sarah Palin credit for perseverance. It was four years ago that Palin invented the notion that the Affordable Care Act (ObamaCare) contained an ominous provision for something she called “Death Panels.” At the time she was referring to a section of the bill that provided reimbursement for end-of-life counseling, a service that enabled people to discuss with their doctors the measures they would want taken in the event they were gravely ill and unable articulate their wishes. Palin’s “Pants-on-Fire” mutilation of that simple and useful proposal was designated as the “Lie of the Year” by PolitiFact. And yet, she continues to peddle the same turd-o-licious deceit in a new video (below) aimed at raising money for her struggling Super PAC. And, as usual, she can count on the truth manglers at Fox Nation to help her to promote these time-worn fallacies. 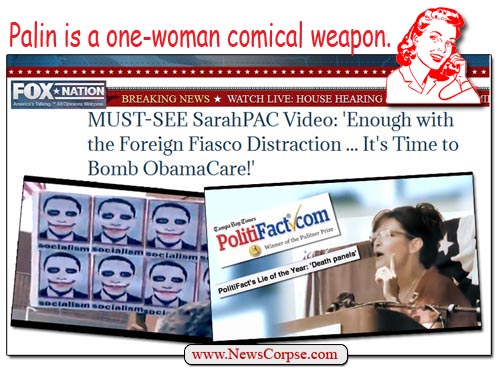 Palin introduces her video with a particularly offensive conflation of her death panel lie and the current crisis in Syria: “Enough of this foreign fiasco distraction. Get back to work. It is time to bomb Obamacare.” Not only is she revisiting her weary untruths, she is resorting to terrorist rhetoric. Her desire to “bomb” ObamaCare, in this context, both belittles the horror of actual bombings by the Assad regime, at the same time as it creates images of the destroyed lives (both medically and financially) of the people who would suffer without access to the medical services that ObamaCare provides. Palin, and her Tea Party, cohorts couldn’t care less about the well-being of Americans who are unable to purchase insurance from greedy corporations who exclude anyone with costly illnesses or preexisting conditions. Just as she couldn’t care less about the victims of atrocities in Syria.

It’s pretty funny, however, that most of the video recounts all of the criticism heaped on her for her desperate and obvious falsehoods. There are clips of President Obama, Keith Olbermann, Ed Schultz, Joe Biden, and Fox’s Bob Beckel, all pointing out that she was full of Grade-A Crapola. Then, in an attempt to claim that she was right all along, she spins her original claim about end-of-life counseling to one addressing the ACA’s Independent Payment Advisory Board. This, of course, is another lie because the IPAB is just a process to maintain high standards and low cost for medical reimbursements. The section of the ACA that refers to the IPAB says explicitly that “The proposal shall not include any recommendation to ration health care.” And then Palin has the gall to close her video by saying “Why wasn’t there just more honesty through this whole process.” Why indeed, Sarah?

This video is nothing more than a transparent and self-serving effort to fill the coffers of her PAC. She makes no attempt to validate her spurious allegations, although she does include dog-whistle imagery designed to make her dimwitted disciples salivate, such as a series of posters labeling Obama a socialist. It’s the same old tired smear tactics that contributed to her electoral defeat in 2008. But after failing at reality television, films, books, etc., she has nothing left but to fall back on the schemes that once helped her to fleece the far-right fools who make up her fan base.