Last night’s crowning of the 2014 Miss America produced a milestone for the event with the selection of Nina Davuluri, the first Indian-American winner. Unfortunately, it also produced a flurry of ugly comments in social media that attacked Davuluri, a native of Syracuse, New York, as un-American, a terrorist, and as “Miss Al Qaeda.” 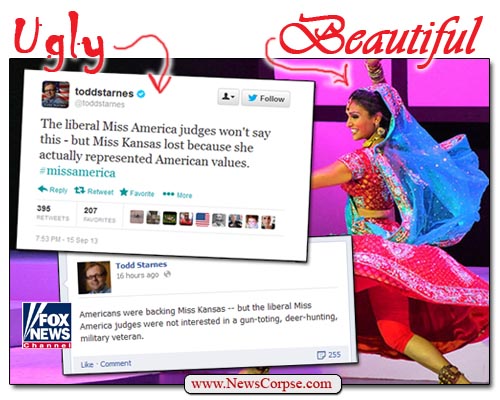 Not surprisingly, the racist culture at Fox News was prominent among the critics of Davuluri’s victory. Fox’s Todd Starnes, a notoriously repugnant religious bigot and homophobe, took to his Twitter and Facebook accounts to bash a young woman who had just realized her American Dream.

Starnes on Facebook: Americans were backing Miss Kansas — but the liberal Miss America judges were not interested in a gun-toting, deer-hunting, military veteran.

The nauseating bias expressed by Starnes is typical of his lack of decency. It is also typical that he bases his hatred on idiotic and unsupported assertions. For instance, he has no idea why the judges did not choose his preferred contestant, Miss Kansas. Consequently, he makes up reasons from his own deranged prejudices and implies that Davuluri does not represent American values. If Starnes’ version of American values include his cretinous loathing of America’s diversity, then here’s hoping that no one embraces the values that Starnes represents.

Starnes also states that “Americans were backing Miss Kansas.” He must have pulled that statistic from the same body part he uses for analytical thought – his humongous posterior. What’s more, Starnes’ accusation that the judges were all liberals was another invention sprouted from his vile ignorance of reality.

Starnes has a history of repulsive statements, yet Fox continues to employ him. It is an indication of their approval of such bigotry. It is a part of their mission as a propaganda outlet that abhors the real America that comprises people of all races, nationalities, and creeds. It’s the Fox way.