As previously reported here, Fox News has been engaged in a coordinated campaign to drive down participation in the Affordable Care Act (ObamaCare) by preventing eligible citizens from learning about their options under the new law. It is Fox’s goal to see ObamaCare fail because they prefer a system that gouges patients, fails to serve at-risk constituencies, and enriches heartless corporations, who in turn enrich their Republican benefactors in Congress.

In addition to keeping citizens ignorant about their legal opportunities for access to health care, Fox is now helping to promote a campaign that is attempting to frighten young consumers away from ObamaCare with blatant disinformation and outright lies (See Fox Nation vs. Reality for a compendium of Fox lies with full documentation). The new campaign features a video (below) produced by a Koch Brothers-funded operation called Generation Opportunity. Their mission is to prevent younger, healthier people from enrolling in ObamaCare, which would strain the financial viability of the program. Unfortunately for those who are fooled by this effort, it would also subject them to greater risks to their health and the threat of financial devastation should they become ill or injured.

The videos show young patients visiting their doctors for routine examinations, but are then surprised by the appearance of an “Uncle Sam” character who has a decidedly perverse demeanor and intent. The young patients react with justifiable horror, which is the same reaction that the video’s producers hope to instill in viewers. The ending tag line is “Don’t let the government play doctor,” which is followed by an appeal to “Opt Out” of ObamaCare.

However, the video does not describe anything in the health care law that would permit the government to interfere with a patient’s relationship with their doctor. There isn’t even an attempt to provide any facts that support their contention that the government would have any role in your medical care. The fear mongering in the video is entirely fabricated and untrue. It is the sort of typically vacuous dishonesty that permeates the GOP’s opposition to health care. Another recent example of this deceit is the charge that “ObamaCare will question your sex life.” That charge was obliterated by PolitiFact as a “Pants On Fire” lie.

Ironically, it is the Republican Party that has been most aggressive in their pursuit of intrusive medical practices. Several GOP governors and legislatures have enacted or proposed laws that prevent women from receiving the reproductive health care that their doctors prescribe. These bills call for invasive vaginal probes that are unpleasant and medically unnecessary. It is precisely the sort of perverse intrusion on a patient’s rights that the “Uncle Sam” video implies, but does not substantiate. Consequently, a better illustration of the horrors of medical interference would feature a Republican villain in the lead role. 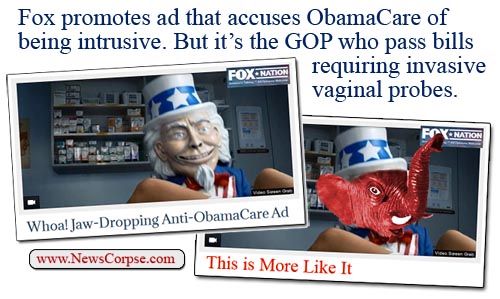 Here is the offensive and dishonest video that Fox is helping to distribute: