After all these years, the right’s fixation on ACORN is still burning with the heat of a thousand white-hot suns – with an emphasis on the white. 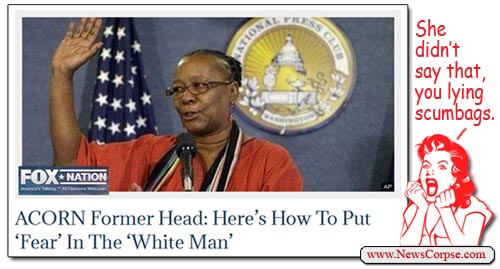 The chronic liars at Fox Nation posted an item that purported to quote Bertha Lewis, the former head of ACORN, as giving advice on “How To Put ‘Fear’ In The ‘White Man’.” However, Lewis did not say what the Fox Nationalists attributed to her. In fact, the text below the headline on Fox Nation proved the blatant misrepresentation by quoting Lewis in full. Her remarks to a meeting of the Congressional Black Caucus were merely a call for the African-American community to support immigration reform.

Lewis: For the first time ever in history, African-Americans outvoted white Americans. Oooh. That’s the fear of the white man. That could change everything. That’s why [immigration] should matter to us.

Lewis was plainly stating her opinion that engaged minority voters are something that already brings fear to white politicians and strategists. She was not in any way advocating the use of fear to intimidate whites or any political opponent. Yet that is precisely the false inference that Fox put forth with the mutilated quote they posted.

To the contrary, Lewis was simply noting that Republicans are already running scared. That is unarguably true, as evidenced by the extreme steps Republicans have taken to suppress voting by minorities and to redistrict them out of existence. Lewis noted that in a few years America will be a majority-minority nation, and that frightens the GOP. Even Reince Priebus, the chairman of the Republican National Committee, said much the same thing in an election postmortem following their 2012 defeat:

Priebus: I didn’t need a report to tell me that we have to make up ground with minority groups […] By 2050, we’ll be a majority-minority country, and in both 2008 and 2012, President Obama won a combined 80 percent of the votes of all minority groups.

The GOP has an ongoing obsession with ACORN, an organization that was dedicated to advancing minority participation in the democratic process. It was that focus on equal rights that made ACORN a target of conservatives in the first place. And despite the fact that it doesn’t exist anymore, and that multiple investigations never found any evidence of wrongdoing, the right continues to be preoccupied with its ghost. So much so that they disseminate fake quotations in order to make them look scary and dangerous.

This is a tactic that will only serve to further alienate the constituencies that will eventually dominate the electorate. Even while the GOP recognizes the need to reach out to minorities, their actions prove that they really aren’t the least bit interested in including them in the American family. They would rather continue insulting and excluding them. Nice work, GOP. Let’s see how that works out for you in 2014 and 2016 and beyond.