Moving up from her previous assignment on the Fox & Friends couch, Gretchen Carlson’s new afternoon program on Fox News premiered today with something of a disappointment for the old, white, male, Christian, Tea Partiers who dominate the Fox audience.

Earlier this month Carlson teased the launch of her new show, “The Real Story” during a an interview with her former co-host Brian Kilmeade on his radio show. The discussion took a lascivious turn when Carlson announced that “pants were not allowed on Fox & Friends.” She later chided Kilmeade saying that “You always liked to be shirtless. Sometimes you actually suggested that for me.”

If that saucy exchange didn’t get blood pumping in the Viagra-stuffed Fox watchers, what came next would surely guarantee a anxious tune-in bonanza for Carlson’s debut.

Carlson: You never know what I’m going to show up in. I’m busy putting it all together and so, you know, I might forget my clothes the first day.

Unfortunately for all the Fox pervs who made a point of flipping over to Fox for Carlson’s virgin outing, she showed up fully clothed and sitting behind a desk that obstructed much of the view that fans had become accustomed to on the Fox & Friends furniture. Sometimes the temptation even proved too much for her co-workers. 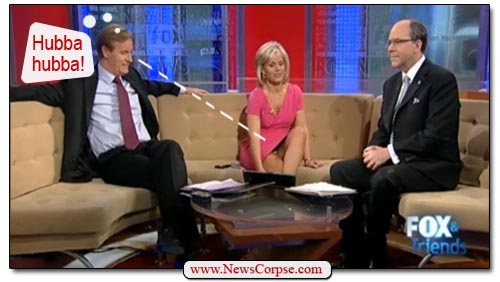 As for the program itself, Carlson managed to book both Donald Trump and Sarah Palin to spice up the first day. Needless to say, her guests insured that the program would have the same low standards for substance, depth, and newsworthiness that she demonstrated on her old show. Trump pretended that he would be able to negotiate a solution to the shutdown crisis, but offered no specifics on how. Palin unleashed her patented word-salad jumble of incoherence that was peppered with insults to the President and anyone else with whom she disagrees.

Carlson herself proved that she does not have the intellectual foundation to host an alleged “news” broadcast. In a discussion about the Justice Department’s announcement that they are suing the state of North Carolina for voter suppression, Carlson was stunned to learn that the state had a voter fraud rate of about .00174 percent. She further dismissed the notion that any other state’s rate would be so low. Of course the truth is that North Carolina’s rate is not the least bit extraordinary, as documented by Media Matters. Voter fraud is extremely rare in the United States, despite the right’s attempt to artificially inflate the issue as some sort of epidemic.

Fox News has had a great deal of success parading a bevy of blonde hosts and contributors who have no journalism credentials whatsoever. She is replacing Megyn Kelly who got a bump up to primetime. Carlson, therefore, may do well in her new role as the network’s newest daytime eye candy. But she will also continue the network’s right-wing agenda and devotion to lies and disinformation. If Fox News is anything, it’s consistent.

14 thoughts on “Gretchen Carlson Not Naked In Fox News Debut”