With the deadline for a government shutdown rapidly approaching, the functionally impotent Speaker John Boehner, and his minority clique of Tea Party diehards, are proposing a third version of the Continuing Resolution in an attempt to blackmail President Obama and the Democrats into undoing the benefits of ObamaCare that millions are already receiving, and that millions more will receive after the insurance exchanges go online tomorrow.

A feature of the new Republican proposal is a version of the Vitter Amendment that would strip health care subsidies for members of Congress, their staff, the President, and other federal employees. The argument proffered for this measure is that government officials have unfairly exempted themselves from ObamaCare and that they should have to live under the same laws as the people they represent. The problem with this tactic is that they already do, at least so far as ObamaCare is concerned. So the GOP is attempting to pass into a law a provision that addresses an imaginary exemption.

The gist of the deception put forth by the House Republicans is that if someone is not enrolled in one of the insurance exchange plans, then they are not participating in ObamaCare. But that is plainly false. The new health insurance reforms include both the exchanges and private insurance. Every American has the option to choose either type of plan. If the President or any member of Congress has the resources to purchase the pricier private plans, they are entitled to do so. And as employees of the federal government, they are eligible for health care benefits from their employer.

What the GOP want to do is pretend that only the exchanges constitute ObamaCare. However, the exchanges are just one part of the program, and they were designed specifically to make access to health care more affordable for people with limited resources. So in reality, forcing the President, or any other federal worker, into the exchanges is what is treating them differently than the people they represent who are free to choose the exchange plans or private plans. What’s more, the GOP amendment proposes to force federal employees into the exchange as well as denying them the benefits they are entitled to as employees. No other American is subjected to these discriminatory policies that were only devised to embarrass Democrats by falsely making it look like they were giving themselves special privileges.

Republicans have been spewing this dishonesty for months, but now they have committed it to paper in the form of a bill that, if not passed by the Senate (which it will not be), will lead to a shutdown of the government. Republicans, therefore, are so obsessed with shutting down the government that they will hinge the whole thing on their insistence that a nonexistent benefit be repealed. They have officially gone past their previous designation as the stupid party. Now they are the delusional party.

Feel free to share this graphic lesson by a character with more smarts than the average Teabagger: 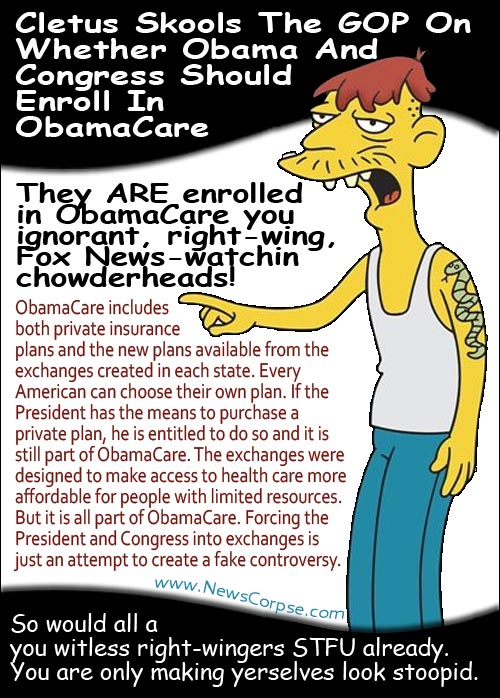