Fox News has been engaged in a massive disinformation campaign against ObamaCare for going on three years now. After all that time, and having exhausted the considerable creative resources that came up with twelve “Pants on Fire” lies about the program, Fox’s desperation is showing. Just last week they went apoplectic over a phony allegation that millions of Americans will be victimized by hackers if they try to enroll in a new health care plan. This week they are testing another absurdity intended to rattle consumers. 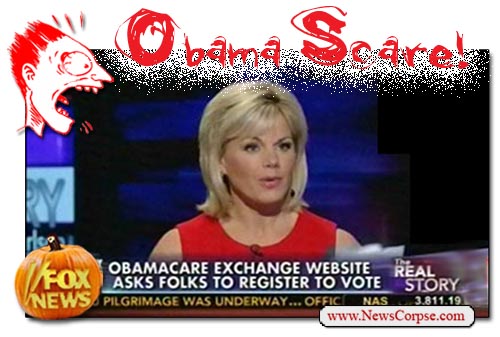 Once again, Real Story host Gretchen Carlson is carrying the water for the Tea-Publican extremists with a segment that reveals the shocking news that the “ObamaCare Exchange Website Asks Folks To Register To Vote.” This startling revelation is met with foreboding by Carlson’s guest, Dr. Marc Siegel (a member of the Fox News Medical A-Team along with this quack):

“I have a problem with it because it seems like more salesmanship. Like, here, go to the state exchange and now, by the way, vote. Vote for who? Vote for a Democrat who’s supporting this? Or maybe if you can’t get through to the exchange, Gretchen, then maybe you vote for a Republican, right?”

Right! Except that no one is ever directed to vote. They are merely given the opportunity to register. And they may register however they wish, just as Siegel himself pointed out. But the core of the right’s trepidation is rooted in a more fundamental aversion to the act of voting itself. It is why they are continually erecting new barriers to voting, such as unreasonably stringent identification requirements, shorter early voting periods, wholesale purges of voter rolls, and of course, brazenly discriminatory gerrymandering.

Republicans simply hate it when people participate in democracy, particularly when Democrats are doing it. To be fair, Democrats would be happy if fewer Republicans voted also, but unlike the GOP, Democrats have not tried to legislate away the right of Republicans to vote. To the contrary, they have sought to expand voter turnout with bills like the 1993 National Voter Registration Act (aka Motor Voter) that mandates that certain government agencies provide people with access to voter registration. In fact, it is that twenty year old law that requires the ObamaCare administrators to make voter registration available. Fox News, and their similarly mortified conservative comrades, are either unaware of this, or are deliberately feigning ignorance in order to rile up their dimwitted base.

The icing on the top of this manufactured controversy is that it appears to have been cooked up by the right-wing MacIver Institute, a think tank funded by the Koch brothers and the neo-fascist John Birch Society. The story appeared first on Fox’s community web site and Fib Factory, Fox Nation, where it was sourced to MacIver. It traveled from there to a flurry of right-wing sites including National Review, Glenn Beck’s TheBlaze, Breitbart News, the Daily Caller, and eventually, the Fox News mothership. This is yet another means that the Koch brothers use to funnel their propaganda into Fox News in the guise of journalism.