Last night the Senate finally crafted a bipartisan resolution to raise the debt ceiling and end the GOP/Tea Party driven shutdown. The sixteen days that government was closed had a materially negative impact on millions of Americans. Nearly 800,000 were furloughed from work. Many more were turned away from federal agencies that provide aid and public services for parks, education, etc.

The media will now spend days/weeks analyzing the repercussions and adjudicating winners and losers. While it may be apparent that the Republican Party and its extremist Tea Party wing have suffered a hobbling blow (their favorability has sunk to historic lows), the harm to the public at large cannot be dismissed. Although, sadly, it may be as the media ignores the ongoing strife in favor of reporting on horse-race style politics. Despite the relief we all feel that the immediate crisis was averted, there is still a price to be paid. And it isn’t cheap: 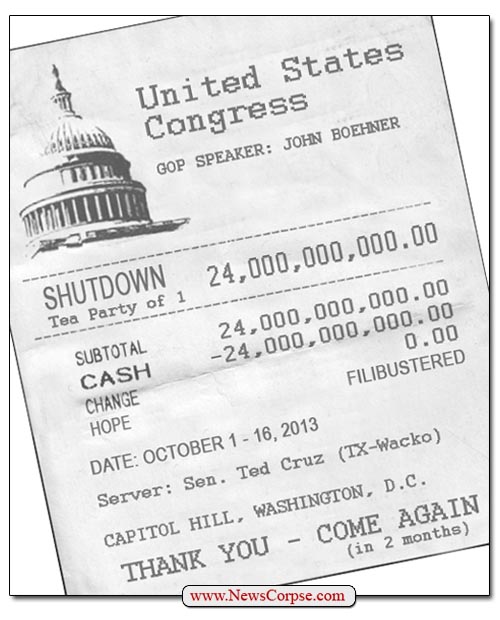 Yep, the shutdown cost America about $24 billion. That is courtesy of the allegedly fiscally responsible Republicans in Congress. Voters need to remember this in November 2014, and Democrats need to repeatedly remind them between now and then. Democrats only need to gain 17 seats in order to take the Speaker’s gavel out of John Boehner’s inept hands. Doing so will improve the prospects for economic recovery, job growth, infrastructure repair, environmental action, and progress on civil rights and income equality.

A change in party control of Congress won’t solve all of the nation’s problems. It won’t end radical Tea Party demands to repeal ObamaCare or for severe cuts to Social Security and Medicare. It won’t stop the birthers and the racists who disparage President Obama and oppose every policy put forth by Democrats. It won’t keep pseudo-patriots from advocating for war at every turn. And it won’t restore sanity to the global financial system that evades criminal responsibilities and exploits average people throughout the world.

However, it will remove from power a gang of nutjobs who hate Obama more than they love their country. It will bring Nancy Pelosi back to the Speaker’s office. It will install Democrats as the chairmen of all committees, replacing corrupt GOP ideologues like Darrell Issa, Dave Camp, and Paul Ryan. And it will put us on surer footing and give us a more productive legislative branch that actually has an interest in governing positively, and in building up America rather than in tearing it down. That’s progress.

13 thoughts on “The Cost Of Winning: Shutting Down The GOP/Tea Party Shutdown”